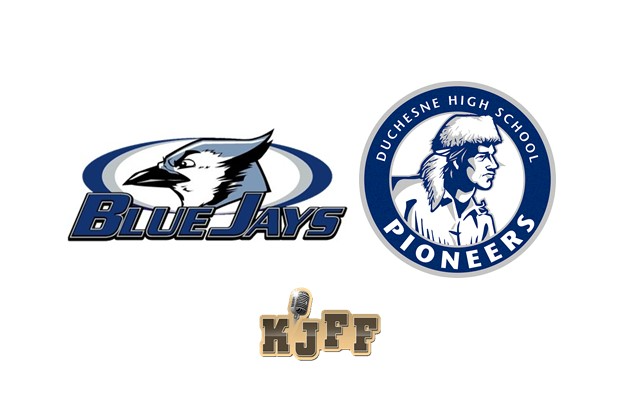 (St. Charles) The Jefferson Blue Jays dominated the Duchesne Pioneers in St. Charles 24-6 tonight  to advance to the Class 2 State Semifinals next week. The Pioneers started the game off with a long 50 yard run but after that it was all Jefferson. A fumble by Duchesne’s Antwon Hayden on the 13 yard line led to an 87 yard touchdown drive for Jefferson.

The Blue Jay defense forced a turnover on downs on the next drive and drove it 63 yards capped off by a Dylan Schnitzler touchdown run.

The score stood at 14-0 at half and after trading three and outs Jefferson took the ball and ran clock. The Blue Jays held the ball for 17 plays, using 10 minutes and 56 seconds of clock between the third and fourth quarters. Colby Ott finished that drive off with a short run the extend the lead to 21-0.

A field goal late in the fourth in quarter made the score 24-0, but the Blue Jays couldn’t quite keep the shut out. Pioneer back up quarterback Amarion Oliphant tossed a 67 yard pass to put six on the board.

In the end, Jefferson controlled the ball for 34 out of 48 minutes. Dylan Schnitzler was named the Applebee’s of Farmington Player of the Game. He carried the ball 31 times for 144 yards and a touchdown. After the game, Schnitzler said the running style of the Blue Jays wears down the opponent.

Duchesne ends the season at 9-2. Jefferson improves to 9-2 and will play for a spot in the State Championship game next Saturday at 1.