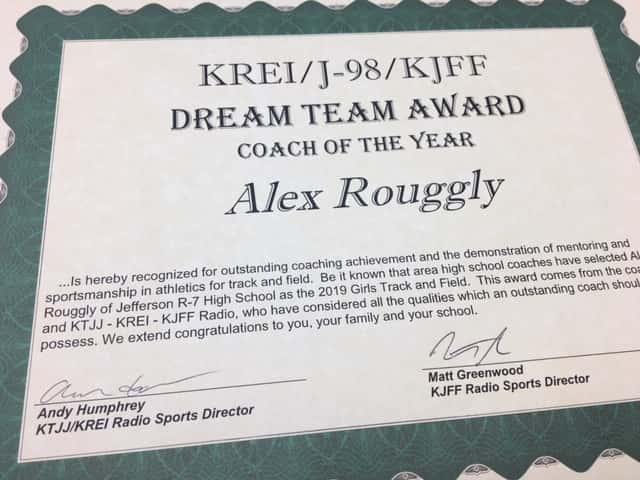 (FESTUS) As announced Tuesday night on the J-98 Spring Dream Team Selection Show, Jefferson R-7’s Alex Rouggly is the Girl’s Track and Field Coach of the Year. It’s the 2nd time area coaches have selected Coach Rouggly for this award. He says that this award is a reflection of the dedication of his assistant coaches and athletes.

One of Coach Rouggly’s standout athletes during his four-year tenure as head of Jefferson girl’s track and field was Anna Heacock, who wrapped up her career at R-7 this past season. Heacock was a two-time state champion in the 100-meter hurdles and a state champ and state runner-up in the 300-meter hurdles. Heacock also had a pair of All-State finishes in the 200-meter dash as well as the long jump, continuing her success with an All-State finish in the high jump. In total, Heacock had 12 individual All-State finishes.

Anna Heacock’s sister, Jordan, enjoyed success as well, finishing All-State twice in the 3,200-meters and once in the 1,600-meters.

Coach Rouggly, who a week ago announced his resignation as head coach for the R-7 girl’s and boy’s track and field teams, says that these last four years running the program have meant so much to him.