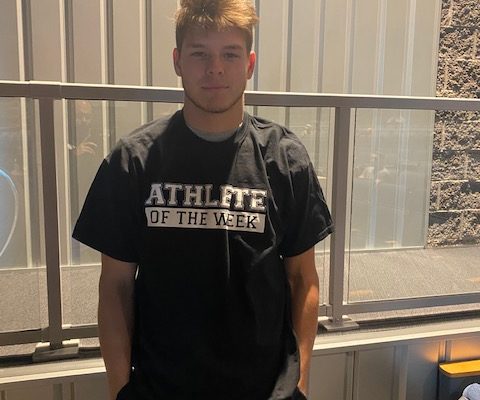 But he may have saved his best for last.

Ott is the Applebee’s of Farmington Athlete of the Week after scoring 5 touchdowns in a Class 2 District 1 championship-game victory over New Madrid County Central.

Ott racked up over 200 yards from scrimmage, bringing his season total over 900 to go with 17 total TDs.

But he says he gets those chances because of teammates like seniors Will and Dylan Schnitzler.

Ott did most of his damage in the 41-20 win over the Eagles on the ground, rushing for 152 yards and 4 scores.

He says his fellow seniors on the offensive line paved open a highway to the endzone.

And as the clock wound down on the first football district championship in school history, Ott describes a memorable scene.

Ott and the Blue Jays will now face Duchesne in the Class 2 state quarterfinals Friday night, a game you can hear on AM 1400 KJFF.

As Athlete of the Week, Ott receives a T-shirt, a certificate, and a coupon good for one free entree at Applebee’s in Farmington.

To hear the full interview with Colby Ott, click play below.