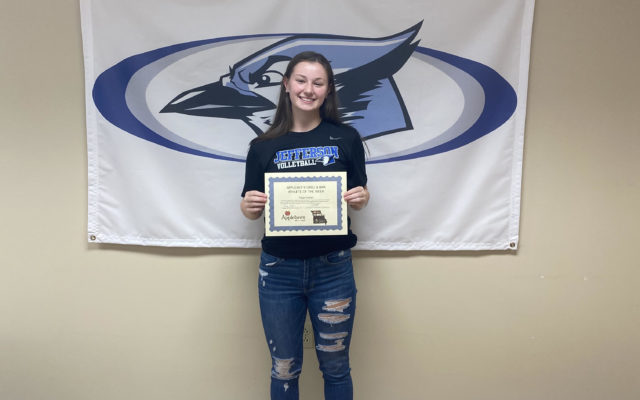 (Festus) Jefferson Blue Jays junior Paige Siebert is turning into one of the top volleyball players in the area.

Her latest run of strong performances has earned her the Applebee’s of Farmington Athlete of the Week.

After her team started the season 0-2, Siebert handed out 239 assists during a busy week that helped the Blue Jays improve to 8-4.

Even after a tough loss late in the week to Valle Catholic, Siebert says she knew this team was capable of much more.

Most of Siebert’s best work this week came at the Dig For Life Invitational on the campus of Southeast Missouri State University in Cape Girardeau.

Jefferson won its first 7 matches and finished second in a 57-team division.

Siebert says it was a strong weekend at one of her favorite parts of the schedule.

Siebert also mixed in 10 kills, 8 aces and 4 blocks during the week.

But she says the biggest reason for her team’s success last week is their chemistry.

As Athlete of the Week, Siebert receives a T-shirt, a certificate and a coupon good for one free entree at Applebee’s in Farmington.