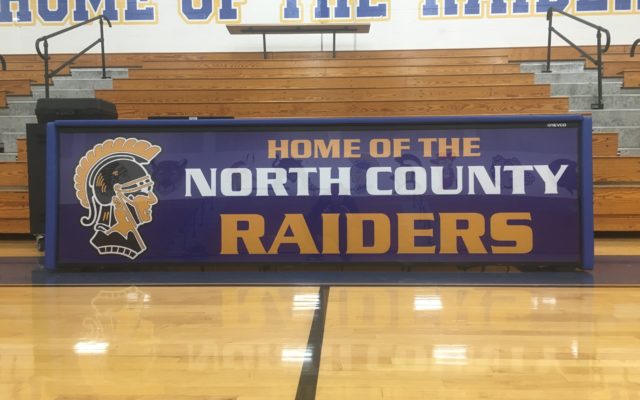 (BONNE TERRE, Mo.) – In a pivotal conference game, it was the North County Raiders boys basketball team defeating the Farmington Knights Friday night by a final of 79-68 on KREI.

North County led virtually the whole way, but were unable to build an insurmountable lead.

After outscoring the Knights by one, two and three points in the first three frames, Farmington got it to within two in the fourth quarter.

Farmington would have their chances to tie it up, but a Brant Gray three that went in-and-out, plus a Bracey Blanton layup that just went begging kept them short of the mark.

Meanwhile for North County, they were led by a monster effort from junior Karter Kekec.

He had 37 points, including this basket to essentially clinch the win for his team.

Kekec hit the free throw as well to extend the lead to 73-66 with just over a minute to play.

J.P. Ruble led Farmington with 18 in a losing effort, while Blanton had 14.

After losing 19 of their previous 20 games to Farmington in the series, North County head coach Jimmy Palmer says this was a huge win for the program.

North County is now 12-5 and 3-0 in the MAAA Large School Division.

They’ll travel to Fredericktown on Tuesday for their next game.

For Farmington, the record falls to 10-7 and 2-1 in conference play.

They’ll have a matchup at the Central Rebels on Tuesday, who carry a 3-0 record in MAAA play.

That game can be heard on J-98, with pregame coverage beginning at 7:15.