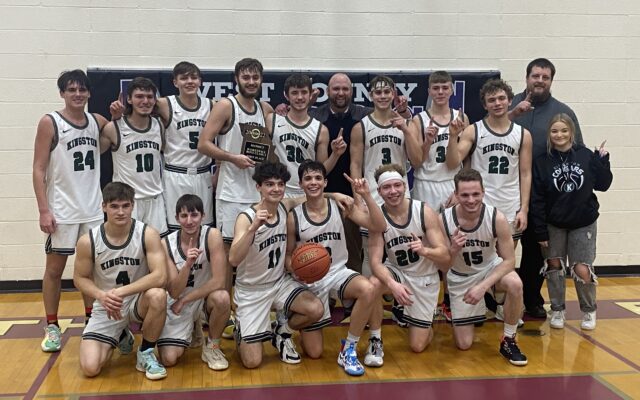 (Leadwood) For the first time in school history, the Kingston Cougars boys basketball squad are district champions, defeating the Greenville Bears 45-41. It was a slow start to the game as both teams were tied at 8 after one quarter. But in the second, Kingston Junior Collin Sumpter would turn up the heat with an emphatic transition jam.

Cougars Forward Matthew Nelson came alive in the second quarter to give the Cougars a 5-point lead heading into halftime.

The Greenville Bears weren’t fazed by the halftime deficit and big shots from Ty Huffmaster and Talan McDaniel got them back into the game. Junior Jeb Huff would tie the game up with a big shot in the third.

In the final stretch, two big plays by Kingston would solidify their place as district champions.

Matthew Nelson was Our Applebee’s of Farmington Player of the Game with 20 points. Head Coach Paul Hamilton was overcome with joy after the championship win.

Kingston improves to 19-7 and moves on to the sectional round to face Bishop DuBourg. Greenville ends their season at 18-8.