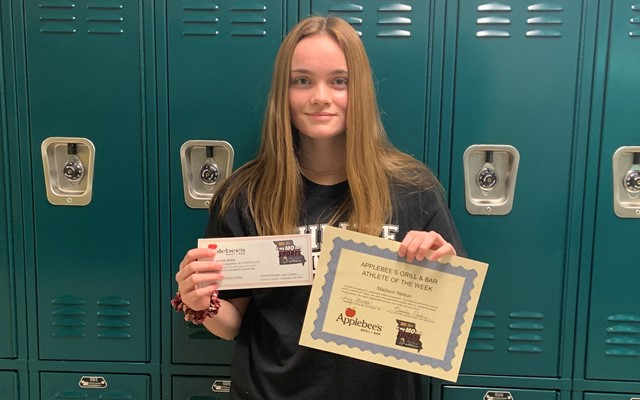 (Cadet) A great week for the Kingston girls basketball team saw them win all three of their games to improve to 7-3 and 1-0 in conference play to move atop the MAAA Small School Division standings.

Leading the way was the Cougars’ junior standout Madison Nelson, who did it all in the team’s victories and was named our Applebee’s of Farmington Athlete of the Week.

She says she appreciates the recognition and that she has worked hard in preparation for this season.

The scoring has been staggering for the Kingston star as she has totaled over 30 points in more than half of the team’s games so far this season.

However, the defense came to the forefront this past week after she averaged nearly double-digit steals and almost two blocks per game.

Nelson says improving defensively was a focal point for her this season.

Nelson has already cemented herself as one of the best, if not the best, girls basketball player to have come through Kingston High School.

She broke 1000 career points as just a sophomore and is already the career record holder for points scored by a girls basketball player in school history.

That accomplishment is not lost on her.

Nelson says she embraces the opportunity to be a leader and someone that underclassmen can look up to at the school.

As Athlete of the Week, Nelson received a T-shirt, a certificate, and a coupon good for one free entree at Applebee’s in Farmington.