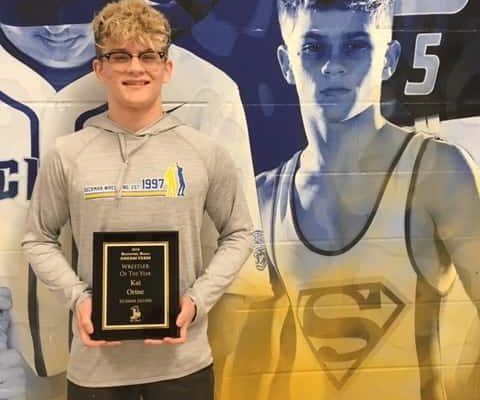 (Raleigh, NC) One of the most decorated wrestlers in Seckman High School history, Kai Orine, is in his first year at North Carolina State University and wrestling as a redshirt freshman.

Kai was a 3-time state champion as a member of the Seckman Jaguars and is off to a 12-5 start as a member of the Wolfpack. Per NCAA rules for redshirt freshmen, Kai is only allowed to wrestle in open tournaments and not duals. He is also responsible for arranging his own travel, lodging, entry fees and meals for these tournaments.

With that in mind, Kai showed up and won the 133-pound weight division of the Pembroke Classic last November, picking up 4 wins in the process. Prior to that, Kai finished 4th at the Battle at The Citadel. Recently, he competed in a tough Southern Scuffle tournament, finishing 4th.

Kai compares his college town of Raleigh, North Carolina to home and talks about college life.

Kai adds that the weight room and the weight coach have both been a game-changer. As for the education side of things at N.C. State, Kai was initially enrolled in Exploratory Studies but is close to getting an official major.

Kai Orine expects to be back on the mat next weekend competing in the 133-pound weight division of a tournament at Appalachian State.