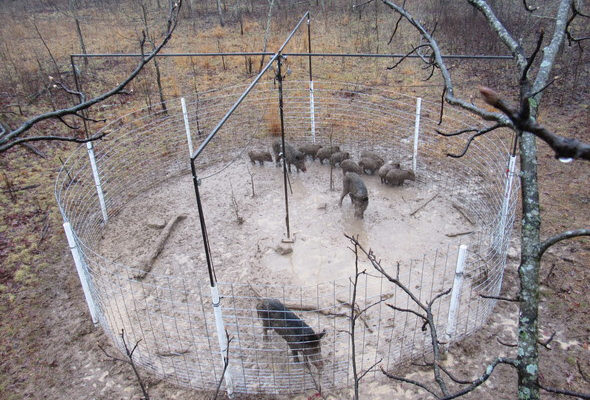 (Jefferson City) The federal government has closed the Mark Twain National Forest to hunters of feral hogs, at the same time, Missouri’s Department of Conservation has launched a new plan to try to eliminate feral hog damage by trapping and killing hogs themselves.

They are trying to help landowners and farmers who have had property and cropland torn up.

But that approach is not sitting well with some landowners who want to hunt the hogs themselves.

Dustin Bell is from Summersville in Shannon County.

Steve Gillespie is from Everton, Missouri, located near Springfield.

He and fellow protesters say their hog hunting should not be a crime but a part of the solution.

Around 150 Missourians gathered in a quiet petition signing and protest outside the governor’s office at the state capitol last week, saying the Missouri Department of Conservation and U.S. Forest Service approach won’t work.