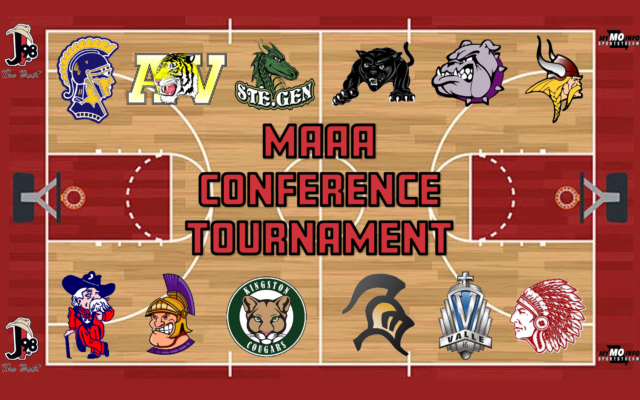 The 8th ranked and top seeded Ste. Genevieve girls stayed perfect on the season with a 57-44 victory over Fredericktown to start quarterfinal play in the MAAA tournament in Park Hills. The Dragons grabbed a 10 point lead at the end of the first quarter and then went on a 20-6 run spanning the end of the first half and beginning of the second half.

Ste. Genevieve improves to 18-0 and will play North County in the semis on Thursday. Fredericktown got 17 points from Mallory Mathes and played the Dragons much closer than they did earlier in the season. The Blackcats go to the consolation side to play West County on Wednesday.

The second game of the MAAA Conference Tournament heard on the MyMoInfo SportsStream went in favor of the North County Lady Raiders today. The Lady Raiders came in to the game as the #4 seed and took on West County who was the #5 seed and won 54-45. Kayleigh Winch was our Applebee’s of Farmington Player of the game and had this play.

North County lead for most of the game, but the Lady Bulldogs pulled within four with this bucket by Alivia Simily in the fourth quarter.

North County finally pulled away with a few good buckets and some successful free throws. Lady Raiders head coach Zac McVey says he is happy with his team’s performance tonight.

The Lady Raiders improve to 15-4 on the season and will face Ste. Genevieve in the semifinals on Thursday while the Lady Bulldogs fall to 16-4 and face Fredericktown on Friday.

In the third game today Potosi’s Kaleb Coffman dunked on the first possession of the game and then Central scored 22 of the game’s next 24 points en route to a 69-52 victory in the quarterfinals of the MAAA tournament in Park Hills. After losing to the Rebels by 27 and 38 points earlier in the season, Potosi outscored Central outside of the 22-2 run executed by the Rebels. Central coach Allen Davis gave the Trojans credit for competing.

Breven McMullen scored 21 points with 17 coming in the first half. He supplied much of the heavy lifting during the run.

Brent Wagner scored 18 with 16 of those coming in the second half. Coffman led the Trojans with 15. Central improves to 16-4 and will play Farmington in the semifinals on Friday. Potosi falls to 4-16 and will face Valle Catholic in the 5th place bracket on Thursday.

Our final match up of the day saw the Farmington Knights defeat the Valle Catholic Warriors in the last game of day 1 in the MAAA tournament as heard on the MyMoInfo SportsStream with a final score of 58-51. It was back and forth the whole game with both teams at each others heels the whole ride. Our Applebee’s of Farmington Player of the Game award went to Isiah Robinson for great plays like this one down the stretch.

Jacob Jarvis was also huge for Farmington tonight with 11 points, but even more so diving on the floor and grabbing loose balls. Head coach Terry Noble says Jacob has always been that type of player.

Farmington improves to 12-8 on the season and will face Central in the semi-finals on Friday which can be heard J98. Valle Catholic falls to 14-9 and will face Potosi in the 5th place bracket on Thursday.