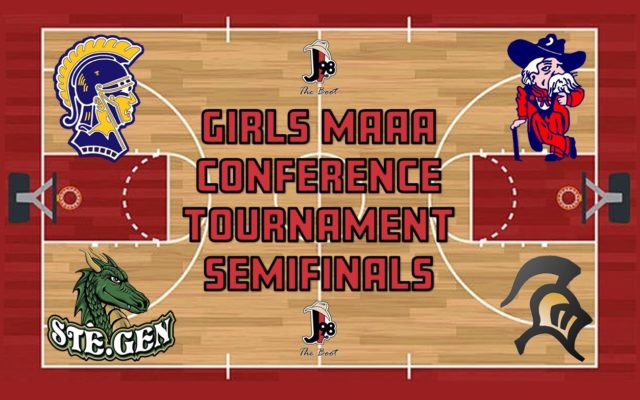 (Park Hills, Mo.) Girls semi final action in the MAAA conference tournament tips off tonight at 6:45 on J-98. It’s a rematch of last year’s semis with #1 Ste. Genevieve and #4 North County. The two teams haven’t met this year due to weather postponing both games. Last year the Raiders topped the Dragons in the semis, and head coach Zac McVey thinks his team matches up well with the Lady Dragons.

Ste. Genevieve hasn’t lost a game yet this season and head coach Jordanna Walk-Robison says scouting is a big part of it.

Ste. Gen and North County can be heard on J-98 starting at 6:45 with the Flieg’s Equipment pregame show.

The second match up of the night will feature the #2 and #3 seeds in the tournament, Central and Farmington. Central took the regular season contest by a score of 58-42 in Farmington. However, head coach Josh Mapes thinks the Knightettes are peaking at the right time.

The Knightettes were only down 3 at halftime of the regular season match up and head coach Rusty Sancegraw of Farmington says his team must keep up the energy the whole game.

Coverage between #2 Central and #3 Farmington will begin right after Ste. Gen and North County concludes. The winner of both games will advance to the championship on Saturday at 7. Coverage of both games can be heard on J-98 starting at 6:45 tonight.