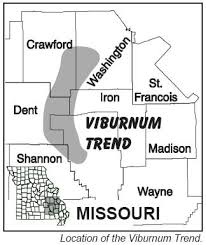 (Bixby) From 1960 to now, lead and other metals have been mined in the Viburnum Trend Mining District near Bixby.

Releases of hazardous substances from the mines, mills, smelters and tailings impoundments at Doe Run Company and other mining companies no longer in operation have impacted soil, sediments and surface water and downstream to tributaries of the Black, Meramec and St. Francis Rivers.

Natural resources like sediments, invertebrates, fish, amphibians, birds and mammals have been exposed to and adversely affected by these releases of hazardous substances to the environment.

A public meeting, held by U.S. Fish and Wildlife, the U.S. Forest Service and Missouri Department of Natural Resources, was held in Viburnum Monday.

They unveiled a long-term damage assessment and restoration plan to the 15 or so residents who attended the meeting.

Mosby tells us the specifics on work on contaminated streams in the Viburnum Trend Mining District.

And we asked Mosby about specific wildlife that has been impacted by contamination.

Mosby says a considerable amount of the work will take place during the first eight years once the project begins.

However, other plans would not take place until the Doe Run Company shuts down it’s mining operations in the Viburnum Trend area for good.

Mosby says they don’t want to start those portions of the plan where re-contamination would take place because of mining operations continuing.

He says it could be decades for some parts of the plan to see work because Doe Run has not given any indication they plan to shutdown those operations any time soon.

It was also announced the Doe Run Company plans to eventually turn over big chunks of property to the federal government and state.

Around 500 acres will become national forest land and around 500 more acres will go to the state.

You can also give a public comment on the plan.