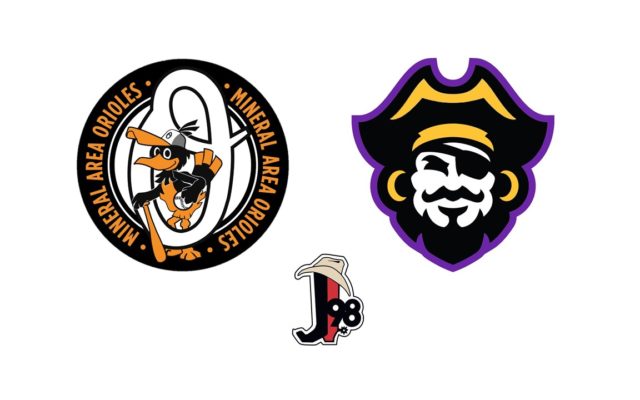 (Farmington, Mo.) Live sports made its return to Regional Radio Wednesday night as the Mineral Area Orioles split a doubleheader with the Potosi Pirates on J98.

In the first game of the doubleheader at Wilson Rozier Park in Farmington, it was the Orioles coming out on top 10-0 in a six-inning mercy rule victory.

Cody Ziegelmeyer got the start for Mineral Area and went the distance, tossing a complete game shutout while allowing just two hits and striking out seven.

The offense was just as effective for the Orioles throughout the game, and Drew Brakefield put the game out of reach late.

Brakefield finished 2-for-3 with a double, three RBI, and a run scored.

Ziegelmeyer and Blane Worley were named co-Applebee’s of Farmington Players of the Game.

Orioles head coach Greg Turner says his team played well in the first game but the second game showed they still have room to improve.

In the second game of the doubleheader on J98, the Pirates came out firing on all cylinders and set the tone with four runs in the first inning before rolling to a 9-4 victory behind a complete game from Zach Francis.

Landon Bone got the offense started for Potosi with one big swing.

Francis was able to settle into the game as it went along as he had eight of his ten strikeouts in the fourth inning or later.

Pirates head coach Jake Swain says Francis was a bulldog on the mound.

Francis was named the Applebee’s of Farmington Player of the Game after finishing a complete game with ten strikeouts and adding two singles, a walk, and a run at the plate.