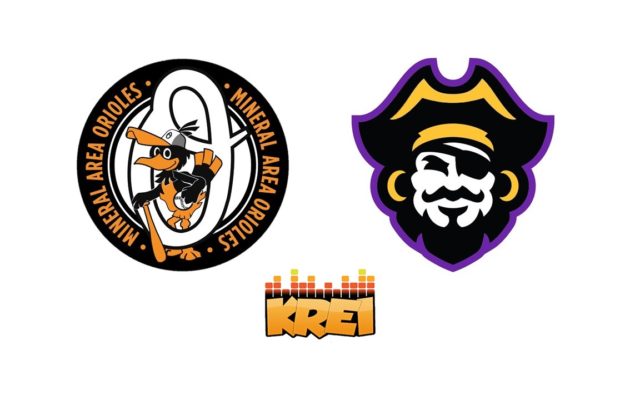 (Frankclay, Mo.) The Mineral Area Orioles took both games of the doubleheader against the Potosi Pirates this afternoon in Frankclay on KREI.

The Orioles wasted no time jumping out to a big lead early in the first game.

Zac Francis got the start for the Pirates and found himself in some trouble in the third inning.

With two runners on and two away, Conner Sullivan drove home a pair with one swing.

Sullivan was named the Applebee’s of Farmington Player of the game after going 1-for-4 with two runs scored and two RBI.

The Orioles pushed across six runs in the third to go up 7-0.

The Pirates were able to scrape across a few runs late but the Orioles offense kept chugging along and put the game out of reach late thanks to Jackson Collier.

The O’s ended up finishing off the first game of the afternoon by a final score of 12-6.

Game two of the doubleheader was a back-and-forth battle as both teams led throughout the game.

The Orioles got on the board first, putting up four runs in the first two innings to go up 4-0.

Potosi refused to go away quietly though as they responded with a five run inning in the bottom of the fourth to take the lead behind the bat of Hayden Roney.

The Orioles responded right away in the next half inning as Blane Worley was able to put his team back on top for good.

Ryan Dempsey came on late and shut the door for Mineral Area as they rolled to an 8-5 finish in game two against the Pirates.

The Orioles’ Riley Resinger was named the Applebee’s of Farmington Player of the game after reaching base in his first three plate appearances and making several great catches in center field.

O’s head coach Greg Turner says winning two games against a tough Potosi team showed that his team is starting to turn the corner heading to the postseason.

Potosi head coach Jake Swain was not too happy with the performance from his defense but gave high praise to both of his starting pitchers.