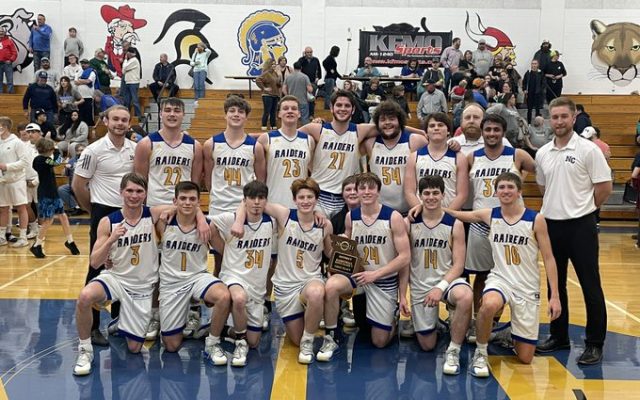 (Bonne Terre) For the first time since 1995, the North County boys are district champions as they took down Farmington in the Class 5 District 2 title game 78-59 tonight on J98.

The Knights raced out to a nine-point lead early in the first quarter, and the Raiders went to work at chipping away at the deficit.

Midway through the second quarter, North County finally took their first lead of the night thanks to a Wil Claywell triple.

It remained tightly contested heading into the break as the Raiders hung on to a 35-33 lead at halftime.

Then in the second half, North County slowly and surely began to extend their lead on their home court.

With several Farmington big men in foul trouble throughout the game, it was Raiders’ post man Nolan Reed who took advantage and eventually put the game to bed in the fourth.

Reed earned both the 2 Dribble Basketball Play of the Game and the Applebee’s of Farmington Player of the Game as he was a beast on the glass and finished with 16 points on the night.

North County head coach Jimmy Palmer says after a slow start, he was impressed with his team’s resiliency.

The Raiders improve to (23-1) on the year and will take on Sikeston in the Class 5 Sectionals on Tuesday.

Farmington finishes the season at (18-8).