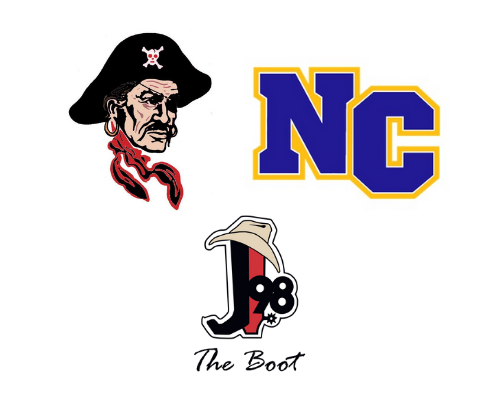 (Bonne Terre) North County’s memorable season came to an end Saturday when they lost 42-26 to Hannibal in the Class 4 State Semifinals.

Hannibal won the coin toss and elected to receive but North County caught the Pirates off guard with a squib kick and recovered it at the Hannibal 28 yard line. It took the Raiders six plays to open up the scoring.

Hannibal answered with a score of their own just 25 seconds later to tie the game. North County got the ball back and embarked on an eight play, 80 yard drive to reclaim the lead.

Senior Nolan Reed finished the game with 113 yards rushing and two touchdowns to go along with 70 passing yards.

Hannibal’s offense wouldn’t let up as they scored 21 unanswered points to close the first half, including this 36 yard touchdown run by sophomore Aneyas Williams.

North County junior Grant Mullins kicked a 30 yard field goal to give the Raiders a 28-17 deficit going into halftime.

North County opened the second half with a four play, 90 second touchdown drive that was setup by a 50 yard run by junior Jobe Smith and capped off by senior Clayton Chandler.

The Raiders went for two but did not convert to keep it a five point game.  North County forced a punt on the defensive end and turned that into another Grant Mullins field goal as the Raiders trailed 28-26 through three quarters.

Hannibal got the ball in the fourth and extended their lead.

The Raiders had some opportunities to get back into the game during the final stretch but they couldn’t muster up any points. A late Aneyas Williams touchdown got us to the final score of 42-26.

Jones spoke afterwards about the ejection and the season as a whole.

North County finishes the season at 12-2. Hannibal remains undefeated at 13-0 and will play Smithville for the Class 4 State Championship next Friday.