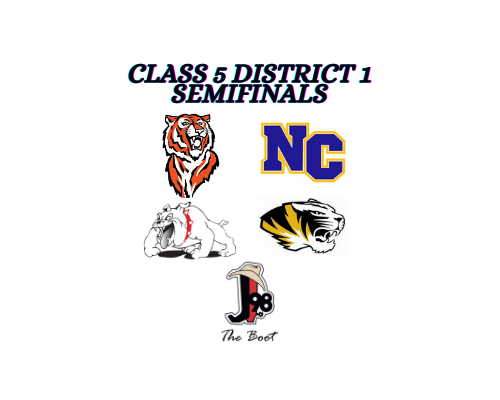 (DeSoto) The North County Raiders and Festus Tigers will try to earn a date with a championship game when they play in the Class 5 District 1 boys’ basketball semifinals Tuesday on J98.

While the Tigers are in the middle of a 20-win season and were receiving votes in the Class 5 state rankings, the fourth-seeded Raiders are red-hot.

North County’s quarterfinal win over the Hillsboro Hawks was their eighth in the last 11 games.

In the second semifinal, Festus seeks to stifle the Sikeston Bulldogs.

It’s been a dominant season for the 20-5 Tigers, powered by stars like junior Arhmad Branch and seniors Cole Rickermann and Eric Ruess.

Standing in the way of their first district title game since 2013 is a Sikeston team that is 17-10.

Coverage from DeSoto begins Tuesday evening with the Flieg’s Equipment Pregame Show at 5:45 on J98.