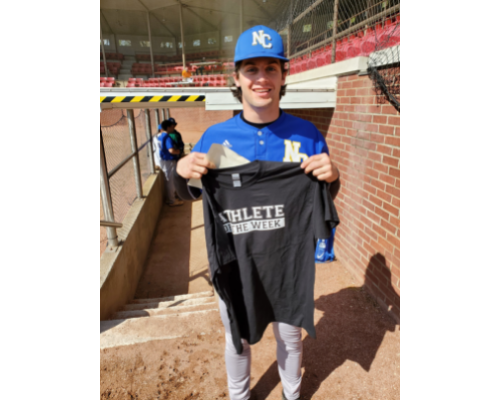 (Bonne Terre) North County junior Jobe Smith has spirited out of the gate this baseball season and is our Applebee’s of Farmington Athlete of the Week. Last week, Smith went 7-for-13 at the plate with 5 RBI and on the mound he threw 7 2/3 innings giving up just 3 runs and striking out 12 batters in 4 games. Smith told us that he’s been seeing the ball well.

With a lot of games cancelled or suspended because of bad weather, Smith has been spending a lot of time in the cage.

Smith tells us what his favorite pitch is.

Smith used the knuckle curve effectively in a 5-3 loss to Farmington Wednesday afternoon, striking out 9 batters in 5 innings pitched. As Athlete of the Week, he receives a T-shirt, a certificate and a coupon for a free entree at Applebee’s in Farmington.