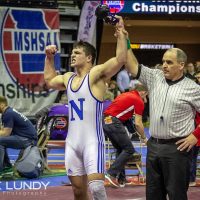 (CEDAR HILL) In the fall of 2020, highly-celebrated Northwest Lion wrestler Chase Stegall will be teaming up with his older brother Tyler at Maryville University. Chase made the commitment official back in late November and the decision was pretty easy.

Chase takes us back to signing day.

The community support for Northwest wrestling has given Chase a great appreciation for his time there.

While Chase’s thoughts have been on wrestling in college, he has managed to also keep his focus on his senior year as well. It’s going swimmingly so far as he is a perfect 15-0 with a couple of “Wrestler of the Tournament” awards in hand. When asked if he feels he’s ready to win that evasive state championship this year, Chase didn’t hesitate to say yes.