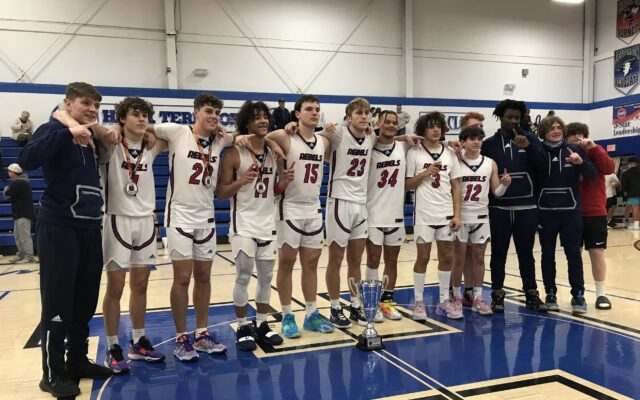 (HILLSBORO)    The Park Hills Central Rebels are the 2022 Champions of the Gene Steighorst Basketball Tournament as they beat the Festus Tigers 63-45 Saturday night at Hillsboro. Central led at the end of the first quarter 18-13 and had a seven pont lead at halftime. The Rebels were up by 13 points after three quarters thanks to this three pointer at the buzzer by Mason Williams.

The Rebels were led in scoring by Jobe Bryant who scored 23.

Ahrmad Branch scored 18 points for the Tigers including this dunk.

Branch got into early foul trouble as he was guarding Jobe Bryant and Bryant was taking the dribble right into Branch. Branch had to come out of the game in the first quarter with two quick fouls. Rebel’s Coach Brad Gross says he is not surprised by what Bryant can do on the floor.

Hillsboro won the third place trophy, they beat North County 83-76. North County had a one point 39-38 lead at halftime but were outscored by the Hawks who led after the third quarter 62-53. Senior Kieran Jones paved the way for the Hawks with 20 points.Dominic Sutton added 17 and Noah Holland pumped in 18 more.

For the Raiders, it was Layne Wigger who scored 28 points and Andrew Civey netted 25.

Hawks Coach Brian Sucharski says he was glad the Hawks did not ease up against the Raiders.

The third place contest and the championship game were both broadcast on 98.5 FM KTJJ and streamed on mymoinfo.com

Earlier on Saturday in the Steighorst Tournament, Windsor won the 7th place game 52-35 over Northwest. Summit won the Consolation game against Seckman 76-53.