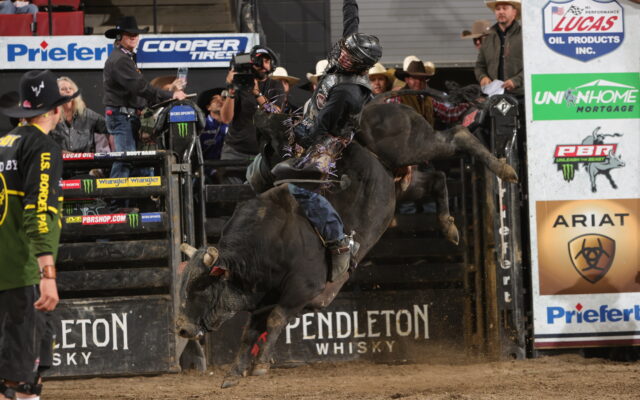 (Steelville) The top 40 bull riders in the world will be competing in St. Louis this weekend.

That includes the P.B.R.’s Unleash the Beast Elite Series’ 19th ranked bull rider in the world, Bob Mitchell of Steelville.

The Crawford County man is coming off his first season in the P.B.R. where he was crowned the P.B.R. Rookie of the Year.

We asked Mitchell about this weekend’s home state event and how he will deal with the added pressure of family, friends and all of his fans watching him compete Saturday and Sunday in St. Louis.

We asked Bob what his family thinks about his very successful, quick rise in the top bull riding league in the world.

Besides Bob, we asked him which rider or riders may have the best chance of winning this weekend.

Mitchell’s other competitors are the bulls and he says if you want to see the difference in the bulls in the P.B.R. and bulls from your local rodeo, the best thing to do is see them live in person this weekend.

You can see Steelville’s Bob Mitchell, last seasons’ World Champion Daylon Swearingen and 28 other cream of the crop bull riders Saturday night and Sunday afternoon at the Enterprise Center in St. Louis.

The P.B.R. will be celebrating it’s 30th anniversary at this weekend’s event.

Action gets underway at 6:45 Saturday night and Sunday afternoon’s bull riding gets going at 1:45.

For tickets, go to ticketmaster.com.