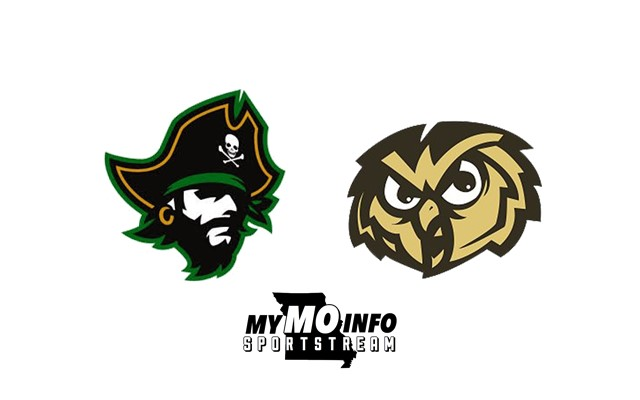 (Imperial) The Perryville Pirates defeated the Windsor Owls tonight 38-18 in Imperial heard on the MyMoInfo Sportstream. The Pirates got their first score of the season early on in the first quarter, on a 9 play 64 yard drive finished off with a 3 yard touchdown run by Jay Jannin. Windsor answered in the second quarter on a Derek Williams 13 yard touchdown run. That tied the score at 6 apiece after both teams missed the extra point.

Perryville got the ball back with 59 seconds left in the half and instead of just running out the clock they wanted to answer the Owls touchdown. In just three plays they moved the ball 80 yards and scored with just seconds left on the clock.

The second half was back and forth with Perryville striking first going up 18 to 6. Derek Williams wasn’t having that and led the Owls on a quick 3 play 57 yard drive.

But Dawson Camden wasn’t done he had one more big play in his bag.

Camden earned Applebee’s of Farmington Player of that game honors. Afterwards he said his connection with senior quarterback Evan Daugherty is special.

Windsor head coach Alex Dematteis knows his team played hard tonight, but knows there are some things to work on.

Windsor falls to 1-1 on the season takes on Festus in week 3. Perryville bounced back from a tough loss in week one and moves to 1-1,they are taking the next week off.