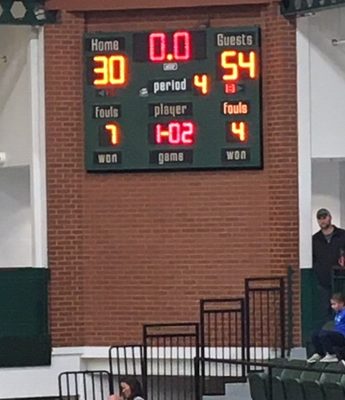 (DESOTO) The Perryville Lady Pirates stormed into DeSoto tonight on the MYMOINFO SPORTS STREAM and defeated the Dragons, 54-30, to begin conference play.

Pirate junior guard Leah Buerck led the charge with 23 points and was the Applebee’s of Farmington Player of the Game. She had seven 3’s on the night with none bigger than the back-to-backs in the 3rd to put an end to an 11-4 run by DeSoto.

The 11-4 run by DeSoto in the 3rd had cut Perryville’s 11-point halftime lead down to 4 when Pirates head coach Angela Fulton called a timeout. Coach Fulton shares her conversation with her players during that timeout…

Perryville finished the game on a 28-8 run after that timeout. The Pirates improve to 6-5 on the season and 1-0 in the Jefferson County Conference while DeSoto falls to 4-12 overall and 0-1 in the conference.

Perryville is back in action on Monday at home against Herculaneum. DeSoto looks to get back in the win column with a game at North County on Monday.