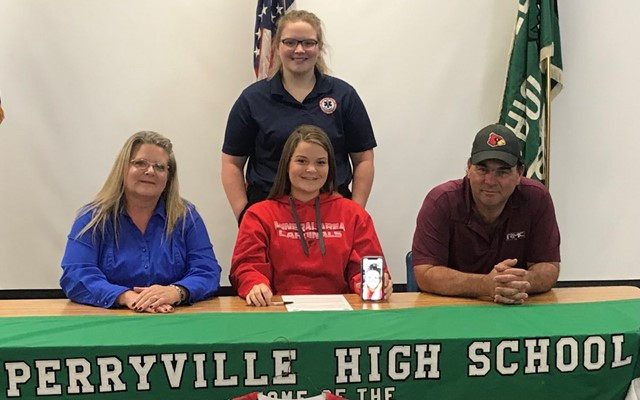 (Perryville) The Perryville Pirates have been one of the most successful fall softball teams in the area in recent years and have been propelled to that level thanks to a tremendous offense that has put up nearly eight runs per game over the past two seasons.

One of the leaders on offense for the Pirates has been Brooke Huber, who recently signed to continue her softball career at Mineral Area College.

She says she chose MAC because of her familiarity with the program after her sister Brandi played with the Cardinals’ softball team.

As someone who has been slotted in near the top of the lineup for Perryville over the past few seasons, Huber was frequently a target of opposing pitchers to try to limit the damage that she did in the box.

Unfortunately for those opposing pitchers, Huber was up to the task more often than not.

She breaks down her offensive approach.

Not only has Huber been a formidable force in the batter’s box, but she has also made a name for herself with tremendous ability behind the plate as a catcher.

However, she has expressed interest in moving to a corner infield position, particularly third base, as she heads off to the college level.

Huber says she is not leaving catching behind per se, but rather wants to add another skill set to her game.