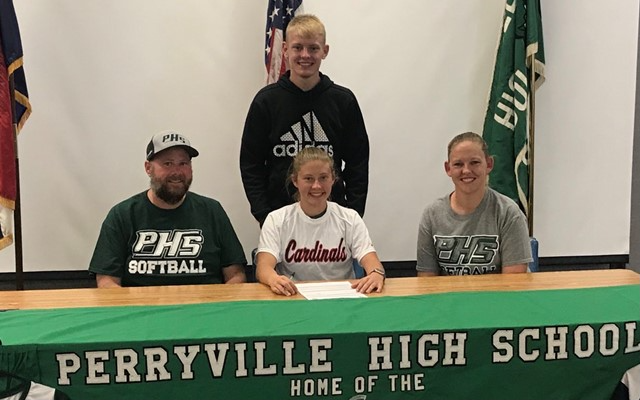 (Perryville) Over the past few seasons, the Perryville Pirates softball team has been anchored defensively in the middle infield by Brittanie Stewart, who now has the opportunity to continue showing off her defensive prowess at the college level close to home.

She recently signed to continue her softball career with the Mineral Area College Cardinals.

Stewart says she chose MAC because of Pirates’ head coach Dustin Wengert’s high praise for the program as an assistant with the Cards, but also after visiting the campus in Park Hills.

The Perryville softball program has been a terrific run in recent years, winning two district championships over the past three seasons and winning 37 games over the past two.

Stewart says it has been a lot of fun playing for the Pirates.

Not only has Stewart been known to make big plays for Perryville over the past few seasons, but she also has been known to do so during high-pressure moments, showing a real “clutch factor” for the Pirates.

Wengert says that reliability made her invaluable.