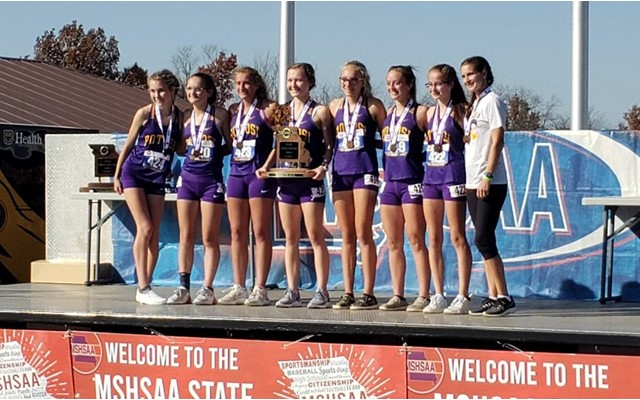 (Potosi) The Potosi girls cross country team finished off a terrific season with a 3rd place finish at the Class 3 State Meet this past weekend.

They had seven runners competing and sophomore Celeste Sansegraw took the top spot for the Trojans as she placed 21st with a time of 20:51.10.

Potosi cross country head coach Amanda Politte says she was so proud to see her team accomplish their season-long goal.

It was a very young group of seven runners competing at the state meet for Potosi.

They featured a pair of freshman – Alyson Skiles and Carlee Moss – a quartet of sophomores – Celeste Sansegraw, Gracie Schutz, Emily Hochstatter, and Kaydence Gibson – and the lone senior – Hallie Portell.

Having so much youth on the team meant that, as the only senior, Portell was called upon to be a leader for the group.

Politte says she would not have wanted it any other way.

Achieving so much success this season with such a young team means that the future is bright for Potosi cross country.

Coach Politte says they are certainly excited about the prospects of what is to come.

While talent can carry any good team, it takes far more – particularly in a mentally grueling sport like running – to be a great team.

Politte says what makes this group so special is they recognize the need to be great in all aspects as a team.

Potosi also had a pair of boys who competed at the Class 3 state meet this past weekend.