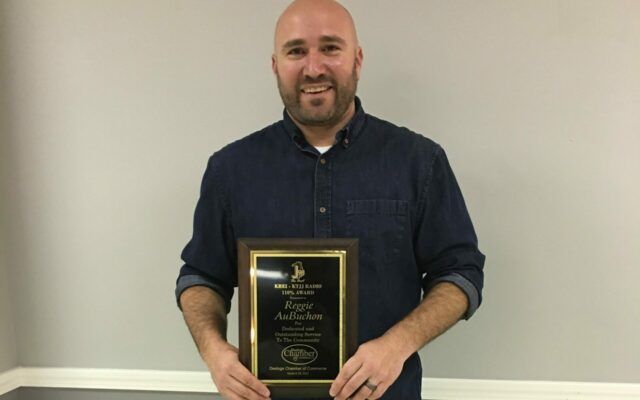 (Desloge) The Desloge Chamber of Commerce Awards Ceremony was held yesterday at Lincoln Street Event Center in Desloge. KREI/KTJJ had the privilege to present the 110% Award to Reggie Aubuchon, owner and president of Bryant Restoration in Bonne Terre. Aubuchon says that receiving the award wouldn’t be possible without help from his wife Chelcy and others in the Desloge community.

Aubuchon tells us what the Desloge community means to him and his family.

Aubuchon was a great quarterback for the North County Raiders years ago. He says he’s been able to take the values he learned on the gridiron into the business world.

Other awards distributed at the Desloge Chamber Awards Ceremony yesterday were KFMO/B104’s Super Service Award given to Ashley Harrison of Giving Tree Boutique, the St. Francois Rotary Service Above Self award given to Jack and Elizabeth Poston with Feed My Sheep, the City of Desloge Public Service Award presented to J.D. Hodge of the Desloge Volunteer Fire Department and the Desloge Chamber Community All-Stars: Mayor Dave Shaw, Dustin Kopp of B104, Bob Monks of the Mineral Area Fine Arts Academy, Hannah Mahaney of American Family Insurance and the Desloge Police Department.