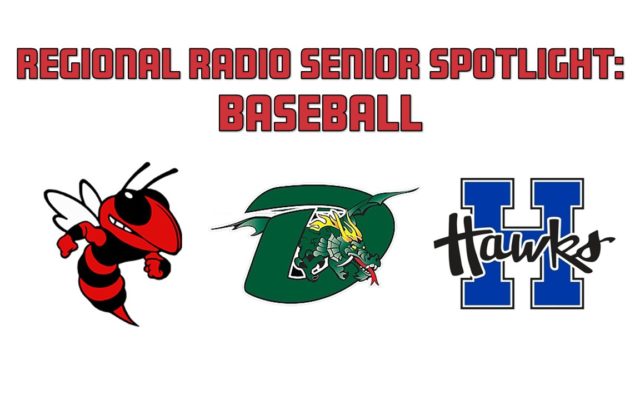 Eisenbeis was a 3-year varsity player and a multi-sport athlete. He had improved each year and was going to play an important role this season. Eisenbeis plans to attend Jefferson College in Hillsboro and then transfer to a 4-year university to major in special education.

Brooks would have been a multi-year starter for the DeSoto baseball team this spring and was one of the team’s top returning offensive threats. He hit in the middle of the order last year and would have been there once again this year. Brooks was the type of hitter that consistently got on base and would rarely strikeout. This past season he led the Dragons with a .475 batting average and was named All-Conference. Brooks was also a member of the DeSoto football team. He will be continuing his baseball career at Fontbonne University next season.

Fischer was a returning player for the Dragons baseball team this spring and would have once again been the ace of the pitching staff. He led DeSoto this past season in innings pitched in addition to leading the team in RBI. Fischer had an arsenal of pitches and was excellent at mixing speeds and locations. He led by example and was a great team player. Fischer was also the quarterback of the DeSoto football team.

Hardin was a returning player for the DeSoto baseball team this spring and was poised to have a big year after coming on strong late last season. He saw limited time in 2019 but hit .421 in 19 at-bats. Hardin was a fundamentally sound player who had great pop in his bat and was always a tough out. He was a true utility player as well, possessing the versatility to play virtually any position on the field. Hardin was also a member of the DeSoto football team.

Grobe was a returning player for the Dragons baseball team this spring and would have played a key role on the field this season. He was one of the team’s hardest workers in addition to being one of the most selfless. Grobe put in a lot of time in the weight room this offseason and showed improvement in his offensive game. He was also an intelligent player who always knew the right play to make.

Kite was a returning player for the Dragons baseball team this spring and was in a position to be the team’s starting left fielder this year. He was a big, strong guy who also possessed tremendous athleticism. Kite had improved his speed over the past few seasons and had great range in the outfield. He also had a huge arm that would have put him in a potential closer role for the team this year as well.

Gibbs was making a return to the DeSoto baseball team this spring after having taken his junior year off. He saw some time behind the plate as a sophomore for the Dragons and would have filled an even bigger role as the team’s backstop this year. Gibbs had a great arm from the catcher position that helped to keep opposing runners in check. He also handled the pitching staff well. Gibbs was also a member of the DeSoto basketball team.

Pinkley was second-team all-conference last season, compiling a .291 batting average with 4 doubles and 14 RBI. Pinkley also had a .361 on-base percentage and .364 slugging percentage.

Hamilton was one of the Hawks’ stars on the diamond last season, batting .300 and slugging .400 with 8 doubles and 18 RBI. Hamilton earned first-team all-conference and plans to play at the next level at Southwestern Illinois College.

Beck hit .130 last season and had 7 RBI. He plans to play baseball in college and is still looking at schools.

Hoelter will look to take his talents to the next level after hitting .265 with 4 RBI as a junior. Hoelter also finished with a .375 on-base percentage and slugged .324 last season. He has not made a final college choice at this time.

McLaughlin aided the pitching rotation with 13 innings on the mound and 11 strikeouts last season. He plans to attend Jefferson College in Hillsboro on the A+ Program.

Evans batted .200 as a junior and was on base almost half the time he came to the plate. He plans on becoming a welder.