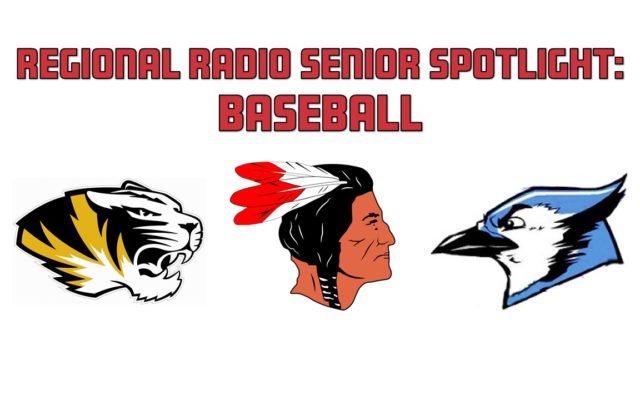 Daugherty is a serious student, but also a dedicated athlete. He started all but 1 game last season, posting a .476 OPS and 6 runs batted in at the plate while also rolling up a .913 fielding percentage. Daugherty plans to attend Mineral Area College in Park Hills and begin study in the physical therapy program.

French is a student of the game who always looked to improve. A 4-year member of the team, French also helped the Tigers as a statistician and manager last season. He was encouraged by coaches to come out for the varsity club this spring and was working towards joining the pitching rotation.

Stafford takes the sport of baseball very seriously and is a determined young man. He pitched in 6 games and racked up 5 strikeouts as a reliever but also scored 5 runs as a hitter. Stafford is pursuing an opportunity to play at the next level and plans to major in engineering at a 4-year school.

Baseball is important to Wilkinson, and he is driven. He had a very productive junior year and was moving into a leadership role. Wilkinson started 18 games on the mound last year and had just a 1.96 earned run average. He also posted a .351 on-base percentage and drove in 9 runs. Wilkinson is verbally committed to continue playing baseball at Southwestern Illinois College.

Wear spent his 2019 season as one of the aces on the mound for the Fox Warriors. He was 6-2 as a starter with a 1.81 ERA and 52 strikeouts in 42.1 innings pitched. Head coach Neil Richardson said he was excited to see Wear pitch in 2020 and believed he would be one of the best pitchers in the area. Wear took on a leadership role, as a senior, in the short time the Warriors spent on the diamond this season, and will go on to use that as he will continue playing baseball at Lindenwood University in Saint Charles. Wear motivated his teammates and led by example on and off the field; he also excelled in the classroom.

Reese got plenty of playtime on a deep Fox baseball team last season. This year, he was set to patrol the center of the outfield using his speed and decision making to be a lockdown outfielder. Coach Neil Richardson spoke highly of Reese saying he expected a big season this year not only in the outfield but as a leader for the team. Richardson was predicting an all-conference and all-district type of season for the senior if they had gotten the chance to compete. Reese is undecided on where he will attend college, but big things are in the future for the Warrior center fielder.

Raney helped the Fox Warrior’s baseball team in 2019 as a fill- in pitcher where he posted a 1.31 ERA in 5.1 innings. This came on a team that graduated 12 seniors and head coach Neil Richardson said it was difficult for a junior to get that much time on the mound but it was nice to know that he could rely on Raney to come in and do his job. 2020 looked promising for Raney to get much more time on the mound. In the words of Richardson, this “funky little lefty” used off speed pitches and good movement on the ball to get it done one the hill. Kyle will attend Jefferson College as a student in the Fall.

Claypool was looking to make his first appearance on the varsity squad in his senior year. He got left off the varsity roster in 2019 but coach Neil Richardson said that didn’t sit well with Claypool. The young man worked his tail off in 2019 and going into 2020 had a great opportunity to make a difference on the mound for the Warriors. As another lefty on the team, Claypool added to a large group of stingy lefties that was going to make the Fox squad dangerous on the hill. Richardson praised Claypool’s work ethic and determination to make the top team this year and said it shows his character is top notch and he’s excited to see where Caleb goes in the future.

Gierer came out nowhere to impress the Fox coaching staff. His tryout for the varsity team proved he belonged and was set to find himself behind the plate in the catcher rotation. The catcher spot was a question mark for the team this year after graduating their number one guy last year and Gierer was ready to show he could fill that spot. Head coach Neil Richardson said having a senior behind the plate is such a boost because of the knowledge they possess and the ability to stay calm, cool and collected in high pressure situations. Gierer was a part of what would have been a team with five seniors that really took the reigns as leaders and were poised for success. Luke Gierer plans to attend the University of Kentucky.

Ebersoldt was one of the most dominant pitchers in the history of R-7 baseball, setting the school record for career wins, strikeouts and innings pitched. He also was top-five all time in hits, doubles and home runs and was a 3-time all-district selection. He will continue playing at William Jewell College in Liberty.

Dowd posted a .375 batting average in his junior season and had 6 runs batted in. He also reached base in over half of his plate apperances and scored 14 runs. Dowd plans to attend Fontbonne University in Clayton.

Harmon was all-conference and all-district last season after batting .321 with 12 RBI. He also led the Bluejays last year with 6 doubles. Harmon plans to attend McKendree University in Lebanon, Illinois.

Heine was slated for a bigger role on the pitching staff after throwing 6 innings last year and allowing 11 runs. Heine did earn a win and a save on the mound last season.

Fraelich was going to get some at-bats this year and be an important piece for Jefferson. Over the past few seasons he was a role player who embraced that opportunity and helped the team win from behind the scenes.

Weik was returning to the Jefferson baseball team after having taken some time off to focus on other sports. Would have been a big offensive player who was asked to drive in a lot of runs.

Handrahan was poised for a bigger role this year after having been a plug-and-play guy for the Bluejays in the past. He embraced his opportunities and was willing to work hard and do whatever it took to help the team win.