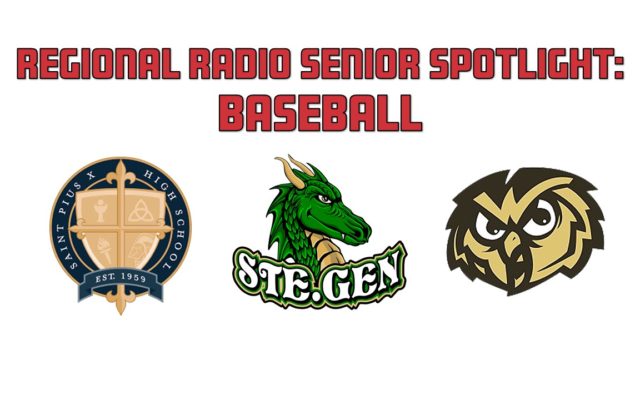 Pesold was a returning player for the St. Pius baseball team this spring and brought great leadership as the team’s lone senior. He came to work every day ready to go and exhibited the behavior and traits that any team would want out of a leader. Pesold would have been a top of the order hitter for the lancers in addition to being a mainstay in the middle of the infield at both the shortstop and second base positions. He represented what a senior and a varsity player should be like. Pesold will continue his baseball career at McKendree University in the fall.

Boyer was a returning starter for the Ste. Genevieve baseball team this spring and was one of the top offensive players in the area. This past season he hit .447 with 11 doubles, 2 homeruns, 34 RBI, 17 runs scored, and was named 1st Team All-Conference and All-District. Boyer was an integral part of the team’s District Championship this past year and would have once again been a middle of the order hitter for the Dragons. He is an extremely talented player but aside from that he’s also a great teammate. Boyer expects a lot out of himself and those around him and he helps make his teammates better through his drive and determination. He will be continuing his baseball career at Fontbonne University in the fall.

Gegg was a returning starter for the Dragons baseball team this spring and was the true definition of a selfless player who had a great work ethic. He always brought a positive attitude to everything he did and was always looking to life up his teammates and encourage them to bring out the best in them. Gegg had a breakout season in 2019 and pitched a lot of big games for Ste. Genevieve. Offensively last year he hit .316 with 5 doubles, a triple, 13 RBI, 14 runs scored, and was named All-Conference and All-District. He also carried a 1.93 ERA with a 3-1 record across 36.1 innings pitched. Gegg was the quarterback of the Dragons’ football team and earned All-Conference, All-District, and All-Region in football this past season. He plans to attend Ranken Technical College in the fall.

Kemper was a returning player for the Ste. Genevieve baseball team this spring and was the type of player who never complained and could not stand excuses. He has an intensity about him, and he expects nothing short of the best from himself and those around him. Kemper certainly knew how to joke around and have fun with his teammates, but he was a no-nonsense guy when it came to the preparation of the game itself. He’s a very goal-oriented individual that when he wants something, he will do whatever it takes to achieve it. Kemper was also a member of the Ste. Genevieve football team. He plans to join the United States Marine Corps after graduation.

Kiefer was a returning player for the Dragons baseball team this spring and was one of the nicest guys on the team. Don’t let the “nice guy” persona fool you however, he was one of the team’s hardest workers both on the field and in the weight room and wasn’t afraid to get his hands dirty. Kiefer was the type of player that sees hard work as a personal challenge to make himself better both mentally and physically. He will graduate in the top 15% of the class and was also on the National Honor Society and ‘A’ Honor Roll every semester at Ste. Genevieve. Kiefer was also a member of the Dragons’ football team. He plans to attend Missouri S&T in the fall where he will study either aerospace or mechanical engineering.

DeRousse was a returning player for the Ste. Genevieve baseball team this spring and always played the game as hard as he possibly could. He suffered a freak injury early last season that kept him out all last year but he showed tremendous determination overcoming that adversity to return this season. DeRousse would have been a big contributor last year and was ready to explode onto the scene this year. He was a coachable player who did what he was told and did it with maximum effort. DeRousse was the type of player that never made excuses and gave it his all each and every day. He was also a member of the Dragons’ football and wrestling teams.

Hartmann put in the work set an example for those behind him. He was set to be a starting pitcher for the Windsor owls this year, but when he wasn’t owning the strike zone he was patrolling the infield as a stud shortstop. Head coach Jeff Young said Hartmann worked out in the offseason to improve his game and he was excited to see what he had this year. He’s an overall athlete that could get it done on the hardwood and the diamond. Hartmann will attend MAC to play baseball.

Baseball is as much mental as it is physical and it always helps to have the smartest guy on the field on your team. That’s what Siegel brought to this team. He would have spent time at second base and on the mound this season. According to coach Jeff Young, Siegel had the “unique ability to throw slow and then throw slower and then put a little movement on it” and would have been a true utility player and asset to the squad. Grant declined an acceptance to M.I.T. to attend Purdue to study Aerospace engineering.

Hummel knows the game of baseball and might have something to say about the previous entry being the smartest on the field. Coach Young said Hummel might have the best glove on the team and would have been a big help anywhere in the outfield. He led by example by always reporting for offseason workouts showing all his teammates what it means to work hard. Nick will attend Mizzou to study accounting.

Martin proved he could swing the bat last season earning what would have been a spot in the heart of the order for the Owls. He spent last season learning how to actually pitch instead of just being able to throw hard and would have spent time on the hill, at 3rd and 1st base. According to his head coach his dry sense of humor makes him a joy to be around like “a seventy year-old man in a seventeen year-old’s body. Matt will attend Missouri Baptist to study sports management.

West didn’t see the field much in junior year, but that was motivation in the offseason to work on getting bigger, stronger and faster. Coach Young said West attended nearly every offseason event and showed real improvement. He earned a starting spot at 1st base and with his added bulk his bat was sure to be deadly. This year was Ian’s time to show out and leave his mark on Owl baseball according to Young. He adds to the overall GPA of a previously mentioned smart squad that ranked 12th in the state in that category.

Role players are a necessity on every team and every team has them. What makes a role player special is when they take up that mantle and own it and do their part to make the team better. Enter Cal Gaitens. His role on this year’s team was as a long reliever on the mound. Coach Young knew he had someone he could put in the game that could get through the tough middle innings virtually unscathed. Gaitens is a player that anyone wants on their team, a guy who did what was asked of him to the best of his ability and didn’t complain.

Stenger, on top of having an all time name for a baseball player, had his junior season derailed by injury. This season he was set to be a full time starter in one of the corner outfield positions for the Owls. According to coach Young he was strong and fast and could hit for power meaning bombs over the fence. Stenger stood to be a staple in the batting order and in out field the season, and is a good teammate and friend on and off the field. He plans to attend Jefferson College to become a police officer.

Omanovic showed his talent on the field last year for the Owls hitting over .300 and was set to be even better this year. He’s an all american type kid, he is sociable, smart and athletic according to his coach. Omanovic commanded center field and it takes quick decision making to be elite out there, Young said he knew what to do and how to get things done. Andy had already signed to play ball at the next level and having that pressure off his shoulders meant he could let loose and really just play ball. He will attend McKendree to play baseball and study radiology.

Having a good catcher can make or break a baseball team, they have to be athletic and smart. The catcher calls the plays for the defense on the diamond and Gmerek was just that for the Owls. He played a little bit in his junior year but took the starting job this year. To call him an athlete is an understatement, Gmerek played outside linebacker on the football field and stepped in to start at the quarterback position when the starter went down. Oh, he also kept playing defense. Coach Young spoke about his ability to really hit the ball saying that you would feel sorry for the ball when you watched him cages, and that he fit the catcher position perfectly.