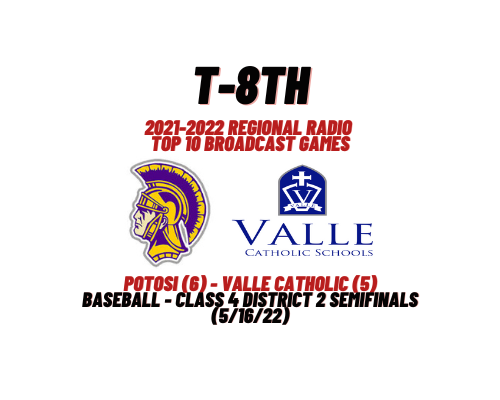 (Ste. Genevieve) We continue our series of features that look back at the top 10 games we broadcast during the 2021-2022 seasons on regional radio as voted on by our sports staff.

On May 16th at Yanks’ Field in Ste. Genevieve, the site of the Class 4 District 2 baseball tournament, an epic semifinal clash between the Potosi Trojans and Valle Catholic Warriors took place. This game is tied for 8th in our Regional Radio Top Ten Broadcast Games.

Potosi was ranked 4th out of 5 teams in the Class 4 District 2 tournament, but the Trojans we’re playing their best ball down the stretch. After winning just 5 of their first 22 games, Potosi entered the district semifinals having won 5 of their previous 6 games including a district quarterfinal win over Perryville.

The Trojans’ only loss over that stretch: to the 7th-ranked team in the state in Class 4, Valle Catholic, a 5-4 walk-off win for the Warriors in the MAAA tournament quarterfinals.

As the lowest seed remaining in Class 4 District 2, Potosi had their chance at an historic victory against the top-seeded, 25-7 Valle Catholic Warriors, who were looking for their 4th straight district championship.

It was a great start for Potosi at the dish. Each of the Trojans’ 2-, 3-, and 4-hole hitters singled with two strikes against them to load up the bases for junior Jay Pashia…

Thanks to good defense and pitching from senior Hunter Kincaid, Potosi maintained a 2-0 lead into the bottom of the 3rd inning.

But the Warriors’ defense was just as good after a rough first inning. Valle starter Collin Vaeth escaped a 2nd inning bases loaded jam and then retired the next six batters he faced.

However, Vaeth found himself in a familiar situation in the top of the 5th when Jay Pashia stepped up to the plate…

Vaeth was taken out after that and relieved by junior Clayton Drury.

Potosi tacked on two more runs on RBI singles from senior Isaiah Arndt and junior Malachi Sancegraw to give the Trojans a 6-0 lead.

The defensive prowess from the senior backstop gave Bieser an extra charge at the plate in the bottom half of the inning. Already 2-for-2 with a pair of singles, Bieser stepped in with a man in scoring position…

Mizzou commit Aiden Heberlie didn’t get a chance to swing, though, because Bieser was picked off by Kincaid to end the inning.

Valle then shut down Potosi in the top of the 6th and the bats picked up right where they left off. Heberlie led off with a single and made his way to third for sophomore Grant Fallert…

Leading 6-2 in the final frame, Potosi went three up, three down at the plate to set the stage for another Valle Catholic walk-off win.

Starting at the top of the order in the bottom of the 7th, Kincaid got one out and put two Warriors on before reaching his pitch limit. Arndt came in relief and walked the first batter he saw to load up the bases.

Arndt struck out the next batter. Now down to their final out, Valle’s Grant Fallert wasn’t ready for his season to end…

After coming on to throw three shutout innings in relief, Clayton Drury had a chance to be the difference at the plate with two runners on.

He missed at the first two pitches and then…

What may have seemed improbable during a difficult stretch to begin the season, Potosi’s 1st victory over Valle Catholic since 2009 was very real.

Entering the month of May with a record of 5-16-1, did Potosi head coach Steve McCoy really think his team could play for a district championship just two weeks later?

The excitement of that win couldn’t last long, though. Winners of 6 of the last 7 games, Potosi returned to Yanks’ Field the next day for the Class 4 District 2 championship game against an even hotter team: the Central Rebels, riding an 18-game winning streak as the 9th-ranked team in the state in Class 4.

The Trojans scored in the top of the first, just as they did against Valle Catholic, but the lead was short-lived.