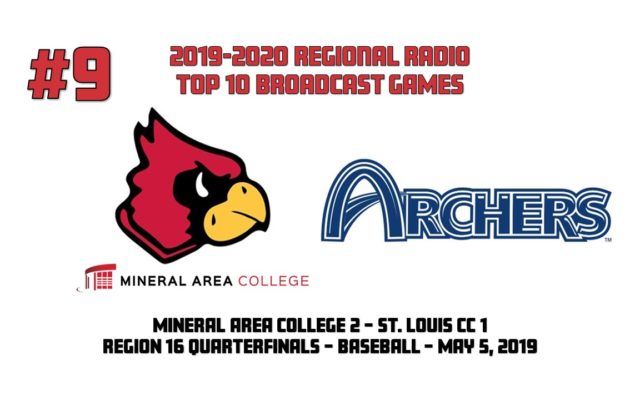 (Cape Girardeau, Mo.) With rain rendering their home field unplayable during the Region 16 tournament, Mineral Area College faced St. Louis Community College in Cape Girardeau to play their best of three series at Capaha Field on the campus of Southeast Missouri State University. MAC won the first game 6-1. What followed was the game of the year for the Cardinals on May 5, 2019. They advanced to the Region 16 final four with a 2-1 victory over the Archers as our number nine top broadcast game on Regional Radio.

Cole Allen pitched his first complete game of the year in leading MAC to it’s sub-regional victory. MAC trailed 1-0 after a solo shot by the Archers Clayton Stevens in the fifth.

The Cardinals responded with their two runs in the top of the sixth. West County graduate and first baseman Jared Jones tied it up with a ball that just about left the yard.

Herman Sepulvada drove in Tommy Van de Sanden for what would become the winning run.

Pitcher Cole Allen turned in a spectacular line: 9 innings, four hits, one run, five strikeouts and one walk. He says he was determined to pitch a complete game.

Assistant coach Jordan Thompson marveled at the effort of his lefty.

MAC averaged over four runs a game allowed during the regular season, but in the games they won against St. Louis in the subregion they gave up only one total run.

Not only was it pitching that fueled the win, but Allen got some great defense behind him as well, including this play by the Cardinals third baseman to close the 7th inning.

Thompson agreed that was the defensive play of the game.

Thompson had nothing but praise for his guys after the game.

And here’s how our #9 Regional Radio Broadcast Game of the Year concluded.

With the win Mineral Area improved to 31-15, winning 12 out of their last 14 games. The Cardinals took the momentum from that win to topple top seeded Jefferson College in the Region 16 championship round in Joplin. The 16th ranked Vikings came in at 47-8 and had won a school record 29 straight.

The Cardinals then lost twice in the double elimination tournament to close the year at 32-17.