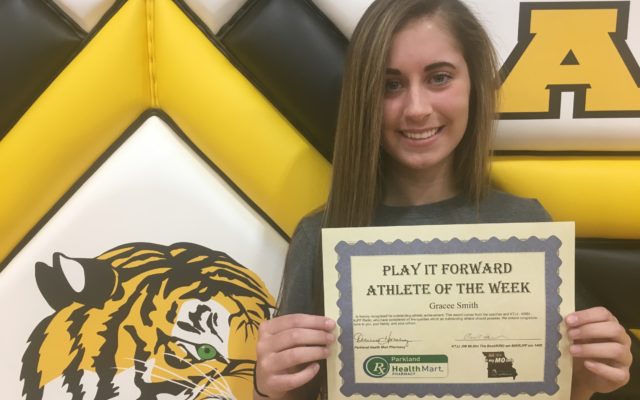 (IRONTON, Mo.) – After a pair of 32-point performances in the Central Christmas Tournament on the girls side against Steelville and Festus, Arcadia Valley junior guard Gracee Smith has captured the Parkland Health Mart Pharmacy Play It Forward Athlete of the Week Award.

She also averaged 7 rebounds and 3 steals per game over the two contests.

Smith says performing at her best during the area’s biggest tournament means a lot.

In addition to putting the ball in the basket at a high and efficient rate, Gracee is also solid from an intangibles perspective.

She tells us being an encouraging force on and off the court is a big thing for her.

And as part of the award, Parkland Health Mart Pharmacy will donate $25 to a non-profit of Smith’s choice.

She is selecting the Backpack Impact program in Ironton, which works to ensure that students in need go home with food over the weekend.

Along with being Athlete of the Week, Smith also received a Play It Forward t-shirt and a certificate.

HIGHLIGHT FROM THE STEELVILLE GAME: