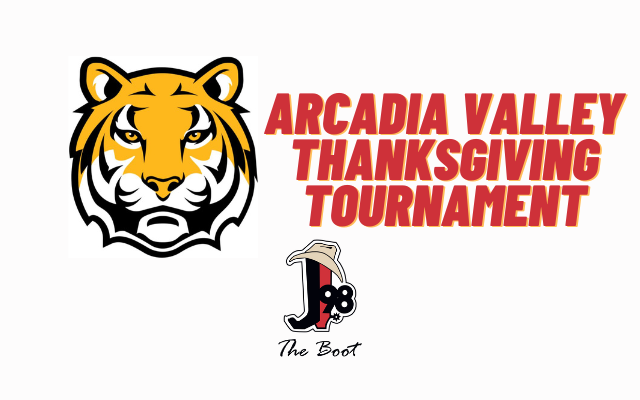 (Ironton) It was a festive and electric night at the semifinals of the 96th Arcadia Valley Thanksgiving Tournament. Two fantastic games set the stage on J98 with South Iron taking down Arcadia Valley and West County defeating Fredericktown.

South Iron opened the night by leading 16-14 at the end of the first quarter.

Arcadia Valley kept it close at the half but South Iron went into the break with a 33-27 lead.

However, Arcadia Valley did not go away. A strong end to the third quarter had the Tigers trailing by just three points.

Arcadia Valley was able to tie the game at the start of the fourth quarter.

But South Iron outscored Arcadia Valley 21-9 over the rest of the quarter to win the game, 59-47. South Iron coach Dusty Dinkins said he was proud of his guys closing out the game.

South Iron will face West County in the title game. The Bulldogs outlasted Fredericktown in the other semifinal 60-51. West County raced out to a six point advantage in first….

That six point advantage was the largest of the first half. West County took a two point lead to locker room, then stretched it to seven in the third before Fredericktown’s Andrew Starkey went red hot….

Starkey hit a three to tie it at 42 at the beginning of the, but West County outscored them 18-9 the rest of the way. Garrison Turner and Levi Hale scored 15 points apiece to lead the Bulldogs…

West County built a ten point lead then hit 10 of 12 free throws down the stretch. Coach Chris Labruyere says even though Fredericktown had a size advantage, he guys played tough on the backboards…

The Bulldogs improve to 2-1 on the year.
Andrew Starkey scored 25 for Fredericktown. The 1-1 Blackcats gets Arcadia Valley in the third place game. Coach Joaby Sikes says that one will be hard mentally and physically…

We’ll broadcast the 3rd place and championship games on J-98 starting at 6:15 with your Fliegs Equipment Pregame Show.