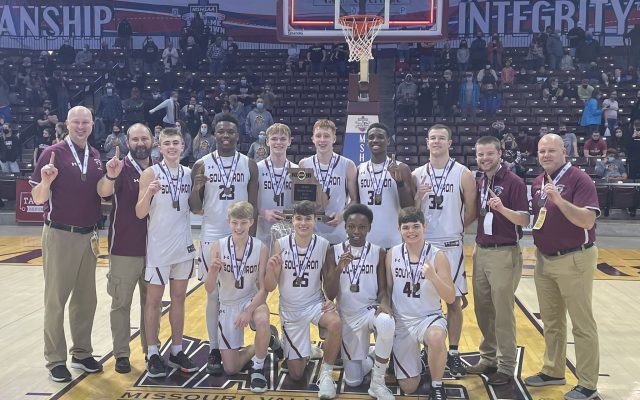 (Springfield) The South Iron boys basketball team are kings of Class 1 as they beat Mound City today 69-50 in the championship game heard on J-98. South Iron came out of the gates with a vengeance on defense and held Mound City to just four points after the first as they lead 13-4. Mound City caught fire in the second, outscoring South Iron 25-15 in the second quarter and took a 29-28 lead into halftime. South Iron got the message from coach Dinkins at halftime and came out firing an all cylinders in the third.

South Iron would go on to outscore Mound City 41-21 in the second half on their way to their second state title in school history.

Brock Wakefield led the way for the Panthers with 22 points and was named our Applebee’s of Farmington Player of the Game. Marco Burse pitched in 20 of his own. Panthers head coach Dusty Dinkins says this one is special.

Mound City finishes as runner-up in the Class 1 tournament with a record of (29-2). The South Iron Panthers win their first state title since 1965 and their second in school history and finish the season with a (25-4) record.