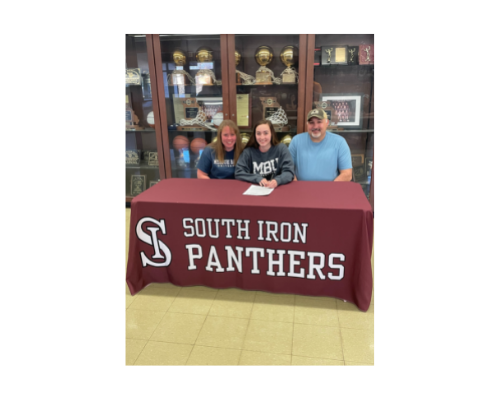 (Iron County) South Iron senior Megan Lashley signed a National Letter of Intent to continue her volleyball career at Missouri Baptist University in St. Louis. The Panthers advanced to the state semifinals for the first time in school history last fall after going 26-10-1. Lashley says this past season opened her eyes to playing at the next level.

South Iron came in 4th at State under first year head coach Megan Williams. Lashley says a lesson about teamwork from Williams left her with a memento she hasn’t let go of.

Lashley also had success on the Lady Panther basketball team, advancing to the state tournament all four years. She says it was a different feeling getting to state in volleyball for the first time.

Lashley is heading into good company at Missouri Baptist. The Spartans are back-to-back N.A.I.A national champions. An outside hitter for the Panthers, Lashley says her role could be different for the Spartans.