St. Pius’ Borrego & Dobey team up for winning tennis, Applebee’s of Farmington Athlete of the Week 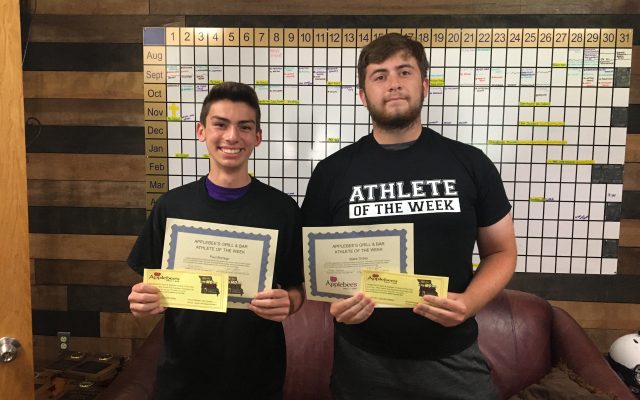 (Festus) The law firm of Paul Borrego and Blake Dobey have been tough to beat on the tennis courts of the St. Pius Lancers.

As a tandem, they’ve been unbeatable this season, and they can add Applebee’s of Farmington Athlete of the Week to their honors.

Borrego and Dobey won the Class 2 District 1 doubles championship to continue their perfect record in 2021 and advance to the state tournament.

They both say it’s been great to see their hard work pay off.

Borrego and Dobey added another JCAA championship to their district title earlier this season, part of careers where they’ve each won over 90 matches.

Borrego says he felt their partnership worked early in their careers.

But the job is not done, with the Class 2 doubles state tournament looming Thursday in Springfield.

Dobey says it would be mean the world to bring home some hardware.

And, while parents, coaches and teammates were thanked, both players couldn’t help but compliment the other.

Borrego and Dobey combined to go 56-2 in singles play this year, and they both rank in the top 10 in school history in career victories.

As Athletes of the Week, they each receive a T-shirt, a certificate and a coupon good for one free entree at Applebee’s in Farmington.

To hear the full interview with Paul Borrego and Blake Dobey, click play below.