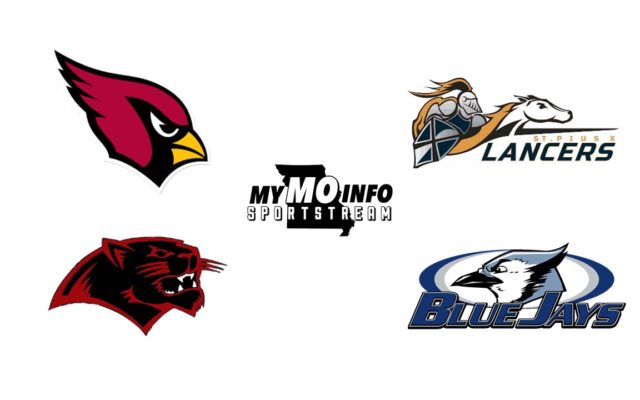 Steelville cruised by Herculaneum 79-44 and St. Pius defeated Jefferson 71-54 as heard on the MyMoInfo SportStream.

In the first semifinal, the top-seeded Cardinals actually trailed 12-2 in the first 3 minutes, but senior guard Tanner Diaz picked up his club.

Steelville finished the first half on a 16-0 run to lead 36-24 and never looked back.
Diaz poured in 27 points on his way to earning Applebee’s Player of the Game.
Cardinals head coach John Tolly said his team woke themselves up after a slow start.
Steelville wins its 17th straight game and is now 24-2.
Herculaneum’s season ends with a record of 11-15.
The second semifinal was a rematch of last year’s District 3 championship game that went the opposite way.
St. Pius got a monster first quarter from senior forward Riley Naeger with 13 points, but their senior point guard Kayden Cook provided enough buckets after that to power the Lancers to the win.
Cook finished with 16 points and was named Applebee’s Player of the Game.
Naeger finished with a game-high 25.
Lancers head coach Chris Miller said the goal of redeeming last year’s district shortcoming is nearly complete.
St. Pius is now 20-7, while Jefferson ends the season at 14-12.
St. Pius will meet the Steelville boys for the Class 3 District 3 championship Friday night after the Cardinal girls take on Grandview in the first title game.
You can hear both games on AM 1400 KJFF.
To hear the full game broadcasts from the District 3 boys’ semifinals, click here.
Connect With Us Listen To Us On