St. Vincent and St. Pius Set to Square off in Conference Match-Up on J98 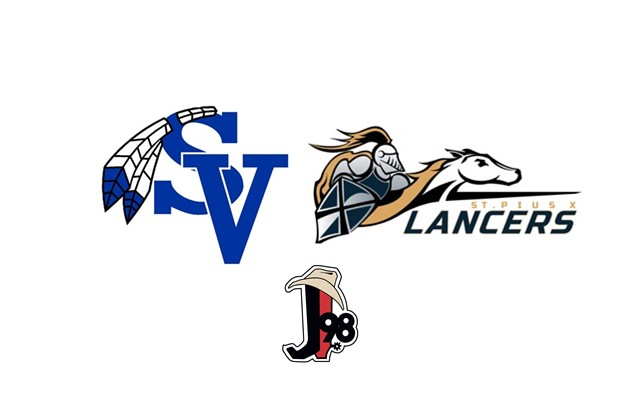 (Festus) Two familiar teams meet up on the gridiron tonight as the 3-1 St. Vincent Indians travel to take on the 3-3 St. Pius Lancers on homecoming. The Lancers hold a three game winning streak over the Indians and head coach Dan Oliver says the team is catching its stride after a big win last week over Doniphan.

St. Vincent likes to throw the ball around using an up tempo, high flying offense. The Lancers prefer the ground and pound wishbone offense. Running back Nate Ruble is averaging 5.3 yards per carry with 434 yard and 4 touchdowns on the ground. Quarterback Collin Smith has rushed for 162 and 4 touchdowns of his own. Oliver says that could be helpful in keeping the Indians offense off the field.

On the other side of the ball, Indians head coach Tim Schumer knows the Lancers are a strong, physical team but that is something his team has faced week in and week out this season.

Quarterback John Wibbenmeyer moved from wide receiver to quarterback this year and it settling into his role throwing for nearly 700 yards, 11 touchdowns with just 2 interceptions in 4 games. For Schumer the idea is simple, get off to a hot start and force the Lancers to keep up with their offense.

It’s the St. Vincent Indians at the St. Pius Lancers with kick off at 7 on J98 The Boot. Flieg’s Equipment Pregame Show starts at 6 on Regional Radio and MyMoInfo.com .