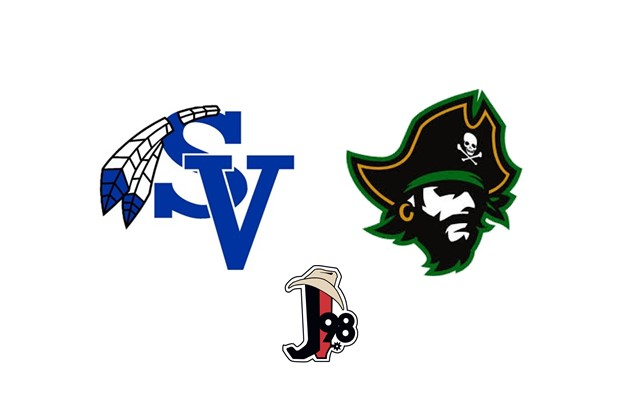 (Perryville) The Battle of Perry County was tightly contested after three quarters, but the St. Vincent Indians pulled away for a 38-7 win over the Perryville Pirates in the J98 Game of the Week.

Trevor Moonier put in the PAT to make it 7-0. Perryville’s second drive was much more successful. The Pirates held the ball for eight-and-a-half minutes and were rewarded at the end.

Ty Peeler made the PAT to tie the game. Momentum stayed with the Pirates, this time on the defensive end.

That drive ended with punt that stayed in Perryville territory. St. Vincent took advantage of plus field position to take a lead into halftime.

St. Vincent got the second half kickoff and diligently drove down the field. Penalties forced the Indians into a long fourth down that gave Moonier a shot at a 37 yard field goal.

It was a 17-7 ball game in favor of St. Vincent at the start of the fourth quarter but things got out of hand from there. Kaden Kassell got an interception that led to another Indians touchdown.

Kassell came away with a couple takeaways. Moonier saw that and wanted in on the action.

Moonier converted the PAT to make it 31-7. St. Vincent’s Jacob Hennemann picked off the Pirates quarterback Rilaynd Graham on Perryville’s first play of the next drive.

Moonier made a field goal and had the pick six, so he decided to help himself on the offensive end.

Trevor Moonier was the Applebee’s of Farmington Player of the Game. We asked Moonier what his favorite score of the game was.

UP next for St. Vincent is a matchup with another 3-0 team, the Herculaneum Blackcats. Perryville drops to 0-3 and will face Bayless next week.