State Revenue Is Up 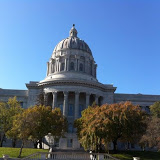 (Jefferson City) Missouri’s budget director says the state’s revenue collections are up by more than five percent this fiscal year.

Total collections jumped by about seven-and-a-half percent in December.

The strong revenue growth means Missouri is on a pace to collect enough revenue to fund the current state budget.