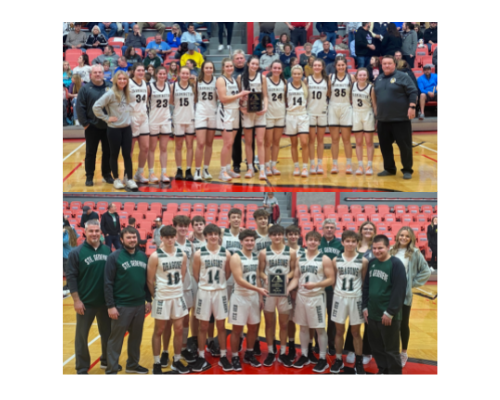 (Park Hills) A full day of M.A.A.A. tournament basketball resulted in champions being crowned and third place winners. In the boys championship game,

For the first time in Rob Coleman’s tenure as the Ste. Genevieve Boy’s Basketball Head Coach, the Dragons have won the MAAA Conference Tournament defeating North County 64-59. It was a back and forth game early in the first, with the Raiders and Dragons trading baskets. During the final two minutes of the quarter, Ste. Gen was able to go on a 10-3 run that finished off with a buzzer-beating three from Ricky Hunter.

In the second quarter, the Raiders outscored the Dragons thanks in part to Layne Wigger. The junior scored 10 in the quarter alone and finished with 16 total at the half.

The Dragons still led the Raiders by 4 at the halftime break. The Raiders and Dragons went stride-for-stride in the third and North County even cut the lead to 1 with seconds left, but an unlikely hero stepped up for Ste. Gen to give the Dragons just a little breathing room at the buzzer.

The tale of the fourth quarter came down to the free throw line. Ste. Gen’s Hunter was able to hit 11 in a row while North County could only hit 1-out-of-6. The clock hit zeroes and the 4-seed Ste. Genevieve Dragons are your MAAA Tournament Champions. Dragons Coach Rob Coleman says that practice really does make perfect.

Ricky Hunter was the Applebee’s of Farmington Player of the Game for back-to-back nights, scoring 25 points in the win. Wigger poured in 21 for North County. The Dragons improve to 17-6 while the Raiders fall to 12-10.

Farmington took the girl’s championship game over North County by a final score of 41-35. A back-and-forth first period ended with a three from North County’s Kate Jones.

The Raiders held a four point lead in the second until Farmington’s Angelia Davis went on a run.

The Knights led by as much as eight in the second half but the Raiders were never far behind.

Leading by two with the game winding down, Farmington got a big bucket.

Junior Jade Roth was the Applebee’s of Farmington Player of the Game with 17 points. Knights coach Rusty Sancegraw says he used mid-game adjustments to win the title.

In the boys third place game, the Central Rebels routed the Farmington Knights 72-54. It was actually Farmington who started out scorching hot with Senior Guard Bracey Blanton drilling 4 threes in the first.

And the Knights would fall behind in the second quarter as the Rebels would start turning defense into offense.

Sophomore Guard Jobe Bryant reached 1000 points in his career in the win and was our Applebee’s of Farmington Player of the Game with 32 points, but even more impressive is his ability to get teammates involved.

West County was the winner of the girls’ third place game taking down Central 39-34. The Rebels jumped out to a 15-6 lead after one quarter of play.

But the Bulldogs cut the deficit to three heading into the half.

Central was up 23-20 early in the third but the lead didn’t last long.

The game was knotted a couple of times in the third but Central never led again as the Bulldogs pulled away at the end. Junior Bailey Skiles was the Applebee’s of Farmington Player of the Game with 16 points and ten rebounds. Bulldogs coach Bobby Simily was proud of his team for the comeback win.