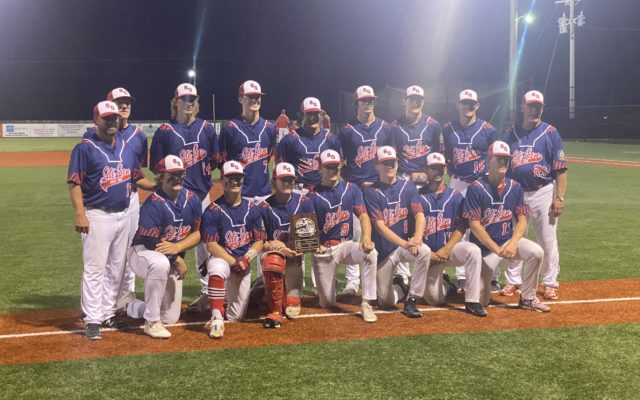 (Ste. Genevieve) Ste. Genevieve Post 150 is your American Legion District 13 Champion after defeating Festus Post 253 in back-to-back games last night. The first game was back-and-forth from start to finish, Ste. Gen. struck first but 253’s Colin Reando crushed a fastball to erase the lead in the bottom of the fourth.

Both teams would answer each other once again in the sixth, tying the game at 4 apiece. Festus had a chance to take the lead, but Ste. Genevieve’s defense wouldn’t allow it.

Ste. Genevieve would score in the top of the seventh off a wild pitch to give them a one-run lead. Festus had another chance to tie up the game, but once again, Ste. Gen’s defense came through in the clutch.

Post 150 would win 5-4 in game one in an instant classic at Yanks Field. The same couldn’t be said for game two as it was all Ste. Genevieve. Festus had a short lead 1-0 but it would be evaporated by the bat of Dream Team Athlete Josh Bieser.

That would be one of the few hits for Ste. Genevieve all game, as they scored 5 runs off 3 errors from the Festus defense. The real story of the game was Drew Bauman, who was the Applebees of Farmington Player of the Game. Bauman only had 6 innings pitched the entire season before making the start in the championship game. He threw 6.2 innings, allowing only 1 run with 6 strikeouts. Even though Bauman didn’t finish the game on the mound, he still recorded the game-sealing out.

Ste. Genevieve improves to 21-7, they will play in the Legion Zone Tournament next Thursday from Jackson.