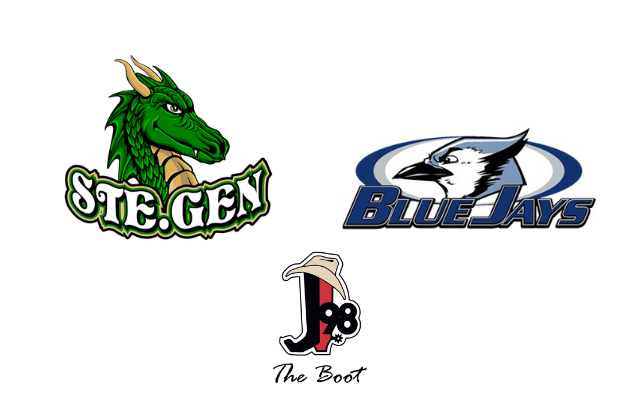 (Jefferson) In an electric J98 Game of the Week, the Ste. Genevieve Dragons defeated the Jefferson Blue Jays 41-34.

It took just two plays for the scoring to get started in this one.

Jefferson misses the extra point, but then offense starts to stall. It took 14 minutes and 43 seconds of game time, but the Dragons eventually were able to take the lead.

Then things started to get wild as the first half came to a close. Jefferson’s Sam Stokes scored his second touchdown of the game with 3:01 left in the first half.

Just 56 seconds later, the Dragons answered. Aiden Boyer threw a 42 yard pass to Aiden Meyer to set up a 2-yard Jack Farlow run for a score to get back in front.

50 seconds after that, Sean Ussery breaks off a 65 yard run for a touchdown to give a 7 point lead back to Jefferson.

Then another 50 seconds go by and Ste. Gen ties it up at 20 a-piece going into halftime.

Four touchdowns were scored in the last three minutes of that first half.

Ste. Genevieve got the ball to start the second, and Boyer found Wyatt Springkamper again for their second touchdown connection of the game.

It took a little longer than 50 seconds, but Jefferson immediately answered on their ensuing drive tying the game up again with a 22 yard Sean Ussery run.

Jefferson gets a stop and forces the Dragons to punt the football. Then Jefferson has to punt after the Dragons get a stop. The Blue Jays punt was blocked, setting up the Dragons in excellent field position.

Dragons QB Aiden Boyer was slinging it all over the field in this game, but used his legs to give Ste. Gen the lead in the fourth.

The Dragons defense comes up with one of the biggest stops of the game, on a 4th and short, the Dragons stop the Jays from reaching the line to gain and capitalize with a 34 yard Jack Farlow rushing TD to take a 14 point lead in the fourth quarter.

But the game still wasn’t over. After taking the following kickoff down to the Ste. Gen 37, Kole Williams heaves it to Nate Breeze with a tremendous TD grab on the first play of the drive.

It wasn’t over by any means, Jefferson is able to get the football back with less than two minutes left to go in the game. The Blue Jays were moving the football down the field, and Williams tried to go to his favorite target Nate Breeze again.

Aiden Boyer threw for 320 yards and 3 touchdowns while adding a touchdown run to his final stat line. In his first full game this season, Wyatt Springkamper caught 7 passes for 184 yards and 2 scores.

For Jefferson, the Blue Jays rushed for 266 yards and 3 touchdowns while QB Kole Williams threw for 131 and 2 scores.

The Dragons improve to 6-2 and will face Kelly at home next week. Jefferson falls to 4-4 and takes on St. Vincent on J98.