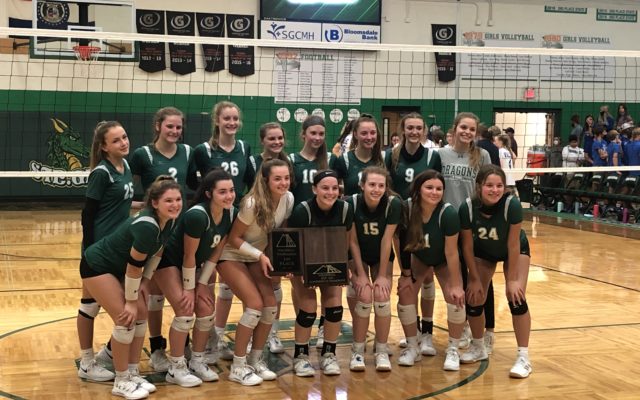 Set two showed similar excitement but the Dragons were able to capture the MAAA Conference Championship with superb defense.

Marysa Flieg was named the Applebee’s of Farmington Player of the Game. After the game, Dragon head coach Carla Basler had high praise for her senior middle blocker.

The Ste. Genevieve Dragons and the North County Raiders kicked off the “gold” bracket tournament with the Dragons winning two sets to none. The Dragons made it look easy in the first.

The Valle Catholic Warriors defeated the Central Rebels in semi final number two 2 sets to none. The Rebels were on a long winning streak but Valle put an end to that.

Valle advanced to play Ste. Genevieve in the championship. Central and North County were set up to play for third place.

After losing their semi final matches North County and Central faced off for third place in the MAAA conference tournament. Central came out on top with a sweep 2 sets none.

After the game, Central head coach Tracie Casey said she would rather lose now than next week.