Ste. Genevieve’s Boyer Comments on Applebee’s of Farmington Athlete of the Week Recognition 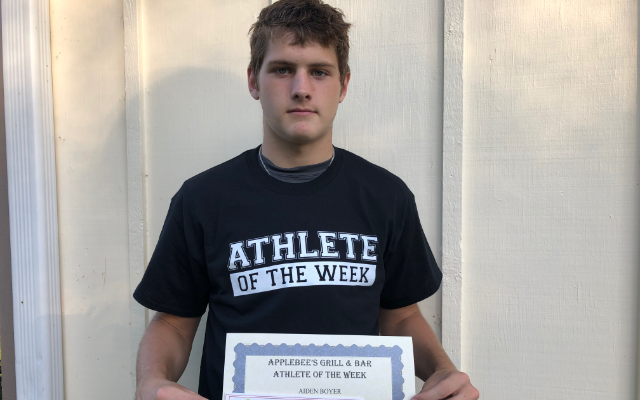 (Ste. Genevieve) The Ste. Genevieve Dragons football team had their highest offensive output of the season this past Friday as they defeated the St. Pius Lancers by a final score of 59-28.

Accounting for most of those points was sophomore quarterback Aiden Boyer, who was named our Applebee’s of Farmington Athlete of the Week.

Boyer says he appreciates the recognition.

Ste. Gen faced a buzzsaw schedule out of the gate and fell to 0-3 with losses to Festus, Valle Catholic, and Kennett.

The Dragons have bounced back with consecutive wins to improve to 2-3, and the offense has exploded for 42 and 59 points after averaging just 11 points per game through the first three weeks.

Boyer says even after the slow start, the coaching staff kept preaching to the team to stay positive and focus on consistently improving.

It was well known coming into the 2020 season that Ste. Genevieve was going to be a very young and relatively inexperienced team after graduating over 20 seniors and a multitude of starters last year.

Boyer says he and the rest of the team have made big strides since the start of the season and are starting to play with more confidence under the Friday night lights.

As Athlete of the Week, Boyer received a T-shirt, a certificate, and a coupon good for one free entree at Applebee’s in Farmington.

The Ste. Genevieve football team will be on the road Friday when they travel to Park Hills to take on the Central Rebels.

We’ll have coverage of that game beginning at 6 on the MyMoInfo SportStream.