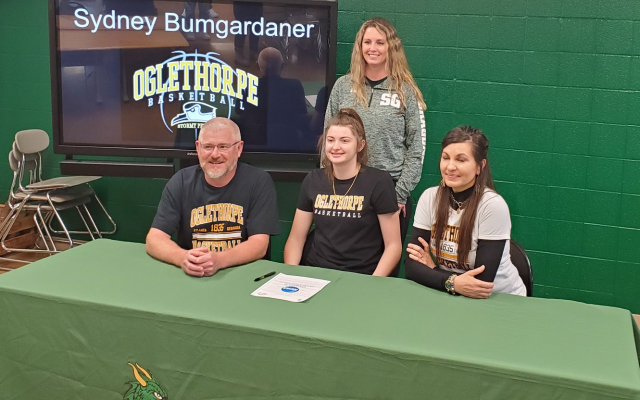 (Ste. Genevieve) One of the most well-rounded players in the area and a standout for the Ste. Genevieve girls basketball team in recent years has announced where she will continue her hoops career.

She says Oglethorpe provided a unique academic opportunity that she could not pass up.

Bumgardaner says she plans to study math at Georgia Tech while studying either political science or business at Oglethorpe.

As great as she is academically, she is equally capable on the hardwood, and she showcased that throughout her career with the Lady Dragons.

By her side and helping her grow throughout her tenure has been head coach Jordanna Walk-Robison.

Bumgardaner says it was a fun experience playing for Coach Walk.

Bumgardaner was a key part of a talented senior class that has led the Ste. Genevieve girls to arguably their best run in program history over the past four years.

The Lady Dragons have averaged 20-wins per season since 2018, which included three-straight MAAA regular-season titles, going (15-0) in conference play over the last three years.

With the team’s success came growing support from the Ste. Gen fans, and Bumgardaner says it was special to be a part of that progression.

In her senior year with the Ste. Gen girls basketball team this year, Bumgardaner averaged 10 points, 6 rebounds, 6 assists, shot 50% from the field, and helped lead the team to an (18-6) record.

She is also the all-time career leader in blocks at Ste. Genevieve.