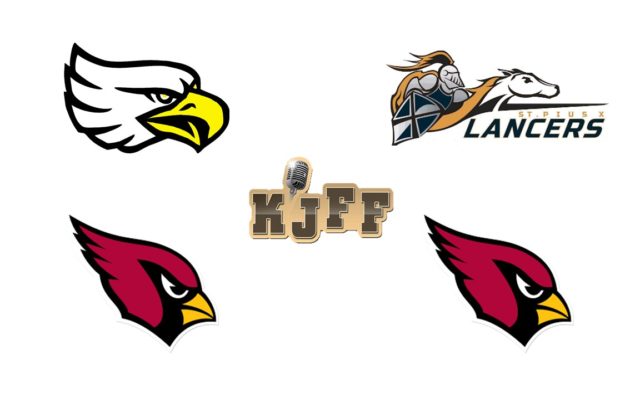 The 2020 Class 3 District 3 championships will be handed out Friday in Herculaneum, and you’ll be able to hear both games on AM 1400 KJFF.

The Steelville Cardinals are 21-5 and have won 6 straight games after they beat Cuba in the semifinals Tuesday 53-42.

Behind sophomore Naomi Perkins and juniors Sydney Booker and Alyssa Church, Steelville has now reached its fourth straight district title game, including a win in 2018.

But on a team with no seniors, Cardinals head coach Seth Collins says it’s exciting to think there might be even more to come.

The Grandview Eagles are 17-7 and defeated the hosting Herculaneum Blackcats 68-55 in the semis thanks to senior guard Sarra Faust and a breakout performance from freshman forward Anna Belle Wakeland.
With the win against their JCAA rivals, Eagles head coach Steve Noblitt says now his team faces their biggest challenge against an opponent they lost to earlier this season.
Steelville won the earlier meeting at Grandview 47-40 on December 3rd
In the boys’ championship game, Steelville takes on the St. Pius Lancers.
The Cardinal boys have won a whopping 17 games in a row and are 24-2.
Senior guard Tanner Diaz has been electric in the district tournament, averaging 23.5 points per game to power Steelville to its third straight district title game appearance.
Cardinals head coach John Tolly says Diaz is working harder than ever because he wants to finally win a championship.
While the Cards seek their first district crown since 2005, St. Pius has also had to wait on a district title.
The Lancers are 20-7 and beat rival Jefferson 71-54 in the semifinals, the same team that beat them in last year’s District 3 championship game.
Head coach Chris Miller says they’re on the cusp, but they face a great opponent.
Coverage of the Class 3 District 3 championship games begins at 5:40 Friday evening with the Flieg’s Equipment Pregame Show on AM 1400 KJFF.
Connect With Us Listen To Us On