Top 10’s in Class 3 Clash in Ste. Gen as #7 St. Mary’s Travels to #2 Valle Catholic on the MyMoInfo SportStream 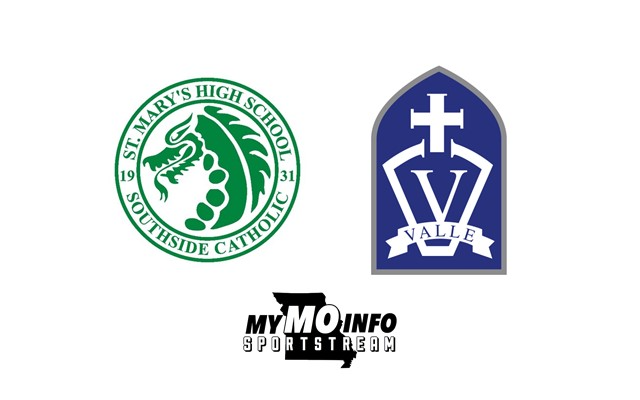 (Ste. Genevieve) A battle between two top 10 teams in Class 3 gets underway at Father John Dempsey Field tonight as the #7 St. Mary’s Dragons head out on the road to take on the #2 Valle Catholic Warriors on the MyMoInfo SportStream.

These two teams have no prior meetings as they both find themselves in new classes in 2020.

St. Mary’s reached the Class 4 Final Four last year as they knocked off Farmington 28-17 in the quarterfinals before falling to state runner-up Platte County 15-14 in the semifinals.

Now after dropping down a class and with only a handful of games under their belt, there are still a lot of questions surrounding this year’s St. Mary’s team.

What is known about this St. Mary’s team is that they have tremendous talent across the field, including one of the top recruits in the nation.

Kevin Coleman is a 5’11, 170-pound receiver for the Dragons – according to 247sports, he is a five-star recruit who is currently ranked as the #19 recruit overall and the #4 wide receiver in the class of 2022.

Coleman will not be the only problem that the Warriors have to account for, and Valle head coach Judd Naeger certainly knows that.

While this may be Valle’s toughest challenge of the season, there is no reason to think they will not be up to the task.

The Warriors are 9-0 coming into tonight’s game and have been flat out dominant throughout the 2020 campaign.

Valle also comes into tonight’s game riding a 21-game win streak that started back on September 20th of 2019 and, of course, includes a Class 1 State Championship.

Simply put, this is the time of year that Warriors fans wait for all season long and in particular this year to see how their team stacks up against the likes of Class 3.

Coach Naeger knows that the unknowns of St. Mary’s will make things challenging, but regardless, his team needs to be prepared for adversity.

Coverage of the Class 3 District 1 Semifinals between #7 St. Mary’s and #2 Valle Catholic gets underway at 6 with kickoff at 7 on the MyMoInfo SportStream.