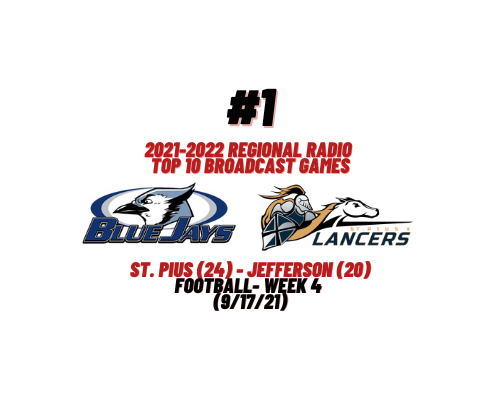 (Festus) One game stood out from the rest as our Regional Radio Game Of The Year. Back on September 17th of 2021, St. Pius and Jefferson battled in a game for the ages on the gridiron. The Lancers defeated the Bluejays as time expired 24-20 on AM 1400 KJFF back in September. The Lancers made a statement on their opening drive, going 84 yards in nearly 9 minutes and capping it off with the senior Nate Ruble.

The Bluejays struck back with a 22-yard field goal from Will Breeze, but the Lancers power running attack was too much for Jefferson in the first half. The senior star punched it in once again from the goal line.

A fake field goal made it a 12-point lead for the Lancers. But Jefferson, the sixth-ranked team in Class 2 at the time, inched closer before the half.

A safety started the second half and gave the Lancers a 7-point lead. However, Jefferson’s offense would respond to adversity again and tie it up in the 4th quarter.

Jefferson would take their first lead of the game after a Will Breeze field goal with 53 seconds left. But, when all hope seems to be lost for the Lancers, a prayer would be answered. Here is the full final play.

Collin Smith made the throw to Dabrien Moss to seal the game and the victory for the Lancers. Smith received the Applebees of Farmington Player of the Game and tells us what happened on that last-second play.